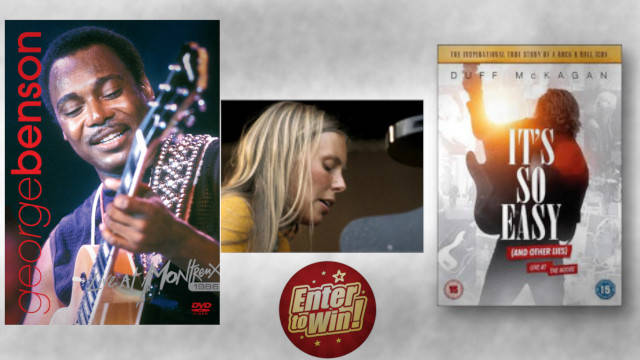 George Benson Live At Montreux 1986: George Benson has been a frequent visitor to the Montreux Festival over many years. Displaying the full range of styles that he has embraced so successfully, this concert from 1986 is one of his best and is packed full of classics and hit tracks including Lady Love Me (One More Time), In Your Eyes and Love x Love amongst many more.

It’s So Easy (And Other Lies) Live At The Moore: Based on the best-selling book, It’s So Easy and Other Lies is a searing autobiographical documentary told through a unique book-reading concert performed by Duff and his new band Loaded. Featuring many of the Gunners most iconic songs and exclusive unreleased footage, it’s a gut-wrenchingly honest, poignant and inspiring journey through the GN’R legend.

Joni Mitchell Both Sides Now: Live At The Isle Of Wight 1970: Directed by Academy winning filmmaker Murray Lerner, it captures Joni Mitchell playing live in front of the biggest audiences of her career. With just her guitar, her piano and her voice she first fights against and then wins over the enormous crowd to deliver a truly outstanding performance with her classic songs such as Woodstock, Both Sides Now and Big Yellow Taxi.

For your chance to own A Bundle of George Benson, Duff McKagan & Joni Mitchell DVDs (as above); simply answer the question below: