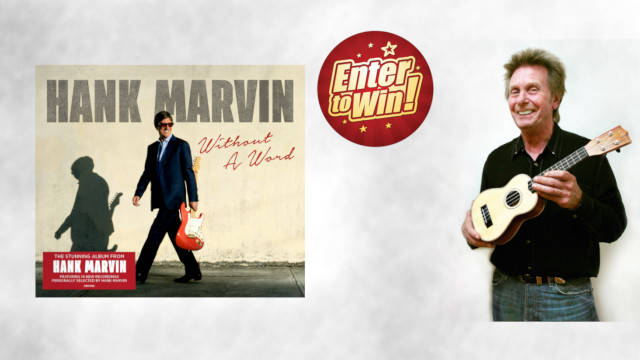 Joe Brown - The Ukulele Album Deluxe Edition features new studio recordings not found on the original album and comes with a special live CD. The Ukulele Album Deluxe Edition, already being called the definite ukulele album, celebrates just what a great exponent of the instrument Joe is. As is name suggest it features the ukulele on every track, but not as a novelty. It is given its full weight alongside raunchy electric and acoustic guitars, mandolins, banjo, lap steel and slide guitars and surprises galore. It features not only Joe’s band, including producer son Pete, but also daughter Sam and 35 of her ukulele club pupils.

Hank Marvin’s Without A Word Album features 14 recordings all of which are given Hank’s interpretation of some of his all-time favourite tunes. Featured tracks are The Fool On The Hill, Cry Me A River, What a Wonderful World, Moon River, Alfie, Are You Lonesome Tonight, Don’t Get Around Much Anymore, America, Peter Gunn- Baby Elephant Walk, Michelle, Will You Still Love Me Tomorrow, TV theme tunes from Doctor Who and Poirot along with one original composition Russian Doll which Hank co-wrote and recorded with his son Ben.

For your chance to own a Bundle of Joe Brown – The Ukulele Album Deluxe Edition & Hank Marvin’s Without A Word Album; simply answer the question below:

Hank MarvinJoe Brown
This competition is now closed. Winners will be announced shortly.