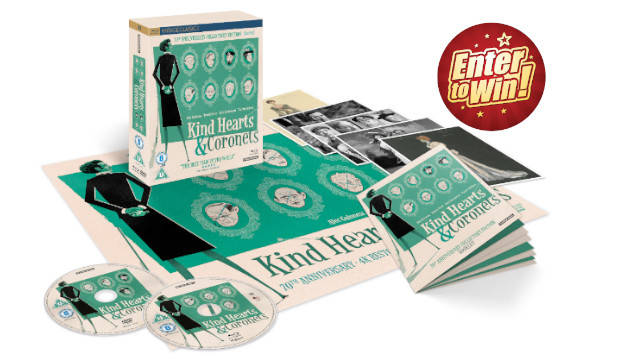 KIND HEARTS & CORONETS received its UK premiere on 23rd June 1949. 70 years later, the film that ultimately became the jewel in Ealing Studios’ crown, is back in cinemas with a glorious 4K restoration and a stunning brand-new Collector’s Edition is released on 24th June 2019 as part of Studiocanal’s ‘Vintage Classics Collection’.

Arguably one of the finest British films ever made, KIND HEARTS & CORONETS is a wonderfully entertaining combination of biting class satire, hilarious farce and pitch-black comedy. As sharp and funny today as ever, it is truly a film for all time.

We have 3 copies of the KIND HEARTS & CORONETS Collector’s Edition to give away. To be in with a chance of winning, simply answer the question below:-

KIND HEARTS & CORONETS
This competition is now closed. Winners will be announced shortly.