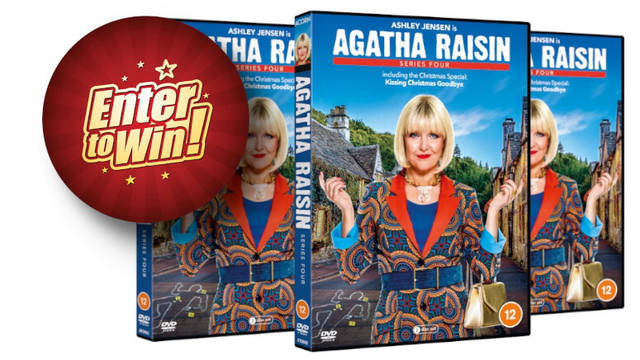 Based on the best-selling novels by the late M.C. Beaton, the fourth series of Agatha Raisin airs on Acorn TV and Sky this May and Agatha Raisin Complete Series Four and One – Four Box Set inc. the Christmas Special: Kissing Christmas Goodbye arrive on DVD and digital 6 June from Acorn Media International.

When glamorous London PR-executive Agatha Raisin retires from the hustle and bustle of the publicity world to live a quiet life in the picturesque Cotswolds, things don’t quite go to plan. When she accidentally becomes the prime suspect in a murder investigation, it leads to a brand-new career as an amateur sleuth. Armed with her trademark tenacity and fashion flair, along with help from her loyal assistant Roy (Mathew Horne – Gavin & Stacey) and her trusty roster of friends: ladies’ man Sir Charles Fraith (Jason Merrells – Waterloo Road), cleaner Gemma (Katy Wix – The Windsors), nosy neighbour Mrs Boggle (Marcia Warren – Don’t Forget the Driver) and paramour James (Jamie Glover – Waterloo Road), Agatha picks up the detective mantle to uncover the perpetrators of a series of heinous crimes and strange murders, lurking in the quaint village of Carsely.

Four series later the Agatha Raisin detective agency continues to thrive, and there’s no shortage of mysteries for the savvy sleuth to solve. Resolving not to spend any more time dwelling on her AWOL on-off partner, James (Jamie Glover – Waterloo Road), Agatha and her merry band of helpers have more cases to crack including a jam competition that spirals into a sticky mess when a judge is mysteriously murdered – Wilkes (Jason Barnett, Bridgerton) hires our favourite formidable PI to keep a lid on things.

For your chance to own 1 of 3 copies of Agatha Raisin Complete Series Four DVD; simply answer the question below:

Win a pair of tickets to the K-FEST 2022: Rhyl Events Arena

Martyrs Lane DVDs up for grabs

Hotter shoes – Win up to £150 to spend on perfect summer footwear!

TRUE THINGS DVDs up for grabs

Start your journey to good gut health with a year’s supply of Bimuno!