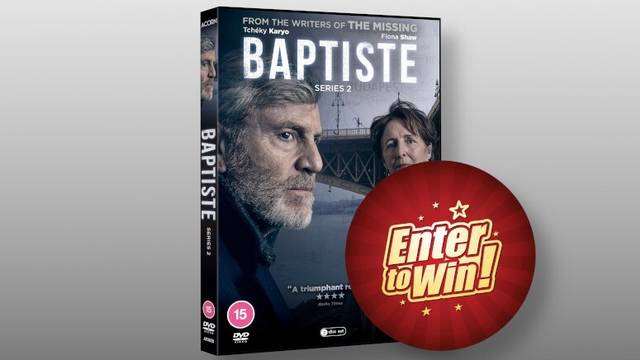 One of TV’s best loved French detectives Julien Baptiste, played by the inimitable Tchéky Karyo, recently returned for the highly anticipated second and final series of Baptiste that also stars the fantastic Fiona Shaw. Following its run on BBC One, Baptiste Series Two gets its DVD release this Summer courtesy of Acorn Media International.

Making waves with the hugely successful drama The Missing Series 1 & 2 Julien Baptiste went solo in his own show Baptiste from the same creators/writers Harry and Jack Williams. The gripping six-part crime drama garnered critical acclaim and now both series will be available as Baptiste Series 1 and 2 Box Set alongside Baptiste Series Two on DVD from 23 August 2021.

The second series joins Julien Baptiste as a changed man, following a devastating personal tragedy, his life will never be the same again. Having pushed his wife Celia (Anastasia Hille – Keeping Faith) away, he is looking for anything to distract him from his pain, whether it’s alcohol or an all consuming new investigation… when news reaches him that  Ambassador Emma Chambers’ (Fiona Shaw – Killing Eve) whole family has disappeared without trace, he wastes no time in offering his help, knowing that this could be the case he needs.

Travelling to the scene of the crime, he embroils himself in this huge undertaking, and Emma quickly realises that she needs Julien as much as he needs the case. Even though he’s no longer on the force he is the only person that can really help with his experience and capacity for understanding human nature. It  becomes apparent that this isn’t a clear-cut missing persons investigation and soon Julien and Emma are sucked into a dangerous world of terrorism, politics and extremism. As Julien tries to escape his own struggles, will he pay the ultimate price to help find Emma’s family?

For your chance to own 1 of 3 copies of Baptiste Series Two DVD; simply answer the question below: