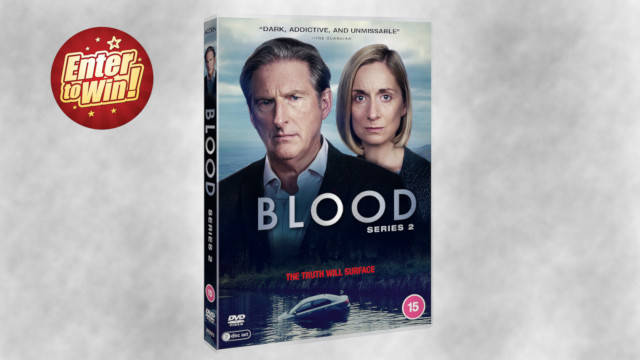 Line of Duty star Adrian Dunbar returns following the huge success of Blood for a second gripping series of the hit Irish drama. This psychological thriller from award-winning writer Sophie Petzal (The Last Kingdom, Riviera) arrives on DVD and digital after its run on Channel 5 as Blood Series Two and the Series One and Two Box Set on 11 May 2020 from Acorn Media International.

After the life-changing events of the first series, when Jim Hogan (Dunbar – Broken, Line of Duty) is placed under suspicion for the death of his wife (Ingrid Craigie – Striking Out, The Dead) by his younger daughter Cat (Carolina Main – Unforgotten, Temple), the Hogan family are still a long way from finding peace. Series Two sees Jim return after a year away to find his dutiful older daughter Fiona (Gráinne Keenan – Black Mirror, The Foreigner) is slowly succumbing to the same Motor Neuron Disease that afflicted her mother.

When Fiona is involved in a catastrophic car crash, the family gather again at the bedside of a loved one, but a shocking revelation means the newly promoted Detective Dez Breen (Seán Duggan – Normal People, Clean Break) must delve into the tangled past of this troubled family once more in pursuit of the elusive truth.

Could Fiona’s husband Paul (Ian Lloyd Anderson – Love/Hate, Herself) be caught up in a criminal enterprise, or is the past simply repeating itself? Either way, there is a dead body to contend with, and someone has Blood on their hands.

This enthralling whodunnit will keep you guessing: is Blood really thicker than water?

For your chance to own 1 of 5 copies of Blood Series Two DVD; simply answer the question below:

Blood S2
This competition is now closed. Winners will be announced shortly.