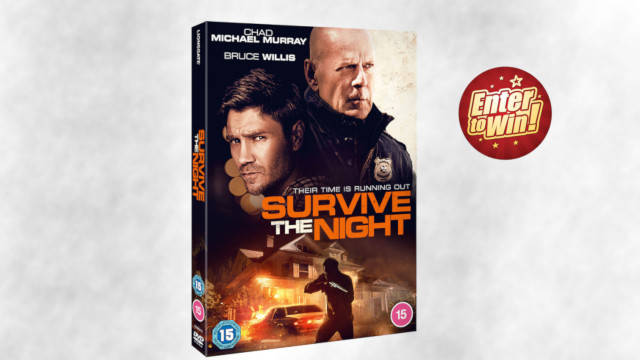 After committing a violent robbery, brothers Mathias and Jamie are making a getaway with their loot when a simple stop at a gas station escalates into a shoot-out due to Jamie’s violent impulses. With Mathias mortally wounded, trigger-happy Jamie is forced to stalk a trauma doctor named Rich (Chad Michael Murray) from the hospital to his home. Holding Richʼs wife, daughter, and ex-sheriff father hostage, Jamie demands Rich operate on Mathias and either save his life or lose his family…

To survive the night, Rich must team up with his estranged, tough-as-nails father, Frank (Willis), in order to gain the upper hand and turn the tables on the criminals. With lives hanging in the balance on both sides and Jamie’s desperation leading to increasingly erratic actions, the tension rises as the morning approaches as father and son are forced to make a stand in order to defend their loved ones.

For your chance to own 1 of 5 copies of Survive the Night DVD; simply answer the question below:

Survive the NightBruce Willis
This competition is now closed. Winners will be announced shortly.