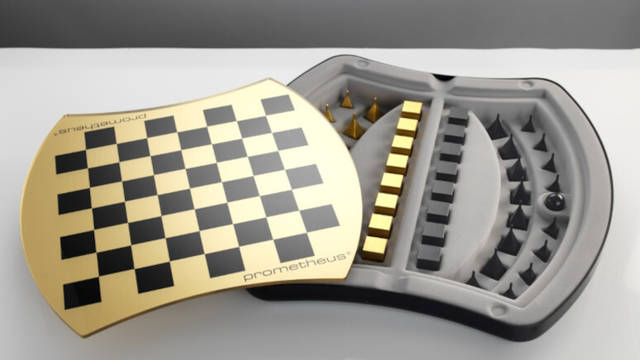 The super deluxe version of new strategy game Prometheus like the one being enjoyed at Number 10 Downing Street. The Prometheus Strategy Game, is invented by Former Head of Maths Christopher Curtis. Prometheus is the must have board game for Christmas and is set to be The Game of our era. Since launching it has received instant popularity in schools in countries across the globe and at Number 10 Downing Street. The game was gifted to Prime Minister Boris Johnson when he was recovering from Covid and was accepted with great enthusiasm as ‘a gift for the nation’.

Prometheus, translated in Greek mythology as ‘forethought’ is based on the number of corners or vertices of dynamic play pieces and is easy to learn for 7 years old plus and fun to play for all the family. No two games are the same and games last for around fifteen or twenty minutes – much shorter than many games of chess. The mainstream version of Prometheus has a RRP of £34.95 of manufactured by Cartamundi, Ireland at their Waterford plant alongside Monopoly and Cluedo is available online and soon to be available via Amazon. The colour deluxe version has a RRP of £199 and the super deluxe version like the one being enjoyed at Number 10 has a RRP of £245.

The story of Prometheus giving the gift of fire to the mortals while the Gods were sleeping is a fascinating one. Through his gift of fire and subsequent sacrifice, Prometheus is considered to be the patron of civilization in Greek Mythology.  He has a small shrine in Athens near to Plato’s academy and was worshipped in Rome by scholars. ‘Prometheus, ‘forethought’ is essential for success in winning a game of Prometheus.

For you chance to win the super deluxe version of Prometheus Strategy Game; simply answer the question below:

Prometheus Strategy Game
This competition is now closed. Winners will be announced shortly.

Win a Cheeky Rascals Baby Bundle for all your baby essentials (worth £122.49)

Win a pair of beautifully made Cosyfeet shoes

THE NEST DVDs up for grabs

HERSELF DVDs up for grabs

Win a pair of Staefit leggings