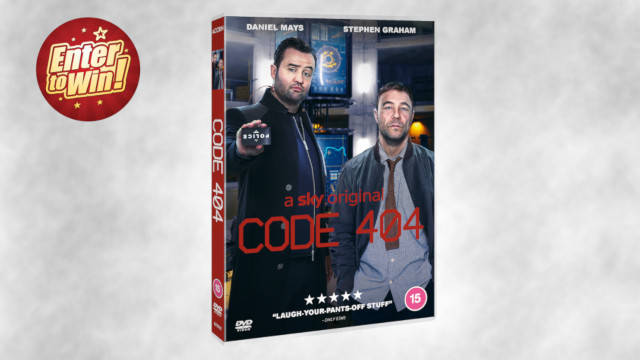 British acting greats Stephen Graham and Daniel Mays join forces as the ultimate dream team, taking the buddy cop genre to another dimension in hilarious new sci-fi mash-up Sky Original comedy series Code 404, which arrives on DVD and digital 6 July 2020 from Acorn Media International.
Detective Inspectors DI John Major (Mays – Temple, Good Omens) and DI Roy Carver (Graham – Line of Duty, The Irishman) are the top crime fighting duo in the Met's Special Investigation Unit, but when an undercover sting goes horribly wrong, Major is gunned down on the job and killed. How will the SIU function without him? Well, it doesn't have to.

As an 'asset' considered too valuable to lose, his body is fast-tracked into an experimental Artificial Intelligence project to bring him back from the dead. The only problem is, Major 2.0 may look like and sound like the original, but something has been lost in translation – quite a lot actually. His arrogant demeanour and gung-ho approach remain, but his crimefighting instincts have completely deserted him.

Somehow, Major's error-strewn hunches and Carver's scrambling to make good allow them to just about scrape by. But while the experiment might be hailed as a scientific success, on the front line Carver is left dealing with an increasingly deluded partner, hellbent on revenge for his own death. Not to mention in the year since his death, Major’s wife (Anna Maxwell-Martin – Motherland, Line of Duty) has moved on, and her new boyfriend could cause Major problems...

Get ready for a rollicking ride, Code 404 will crack you up

For your chance to own 1 of 5 copies of Code 404 DVD; simply answer the question below:

Code 404
Please log in or register to enter this competition.