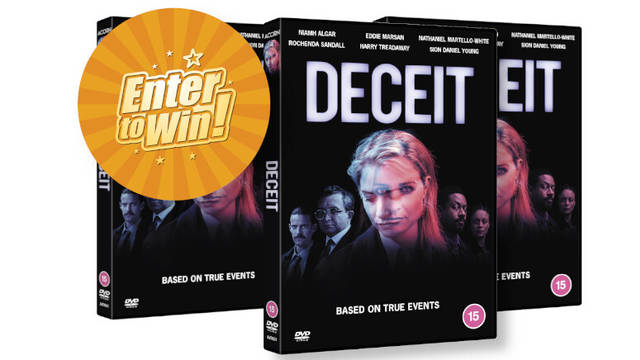 In 1992 a young-woman, Rachel Nickell, was tragically murdered on Wimbledon Common, while out walking with her two-year old son and many lives were destroyed… not only by the brutal killing, but by the subsequent media frenzy that lead to one of the most controversial and catastrophic police investigations of its time.
Now a brand-new four-part, true-crime drama, Deceit looks at the fallout from the shocking killing of the vivacious 23-year-old at the start of her adult life, and the ensuing investigation. Following its transmission on Channel 4, the gripping new series is set to arrive on digital from 4 September and on DVD 20 September 2021 courtesy of Acorn Media.
When BBC Crimewatch aired, witnesses identified a man often seen walking his dogs on the Common… that man was Colin Stagg. Lacking forensic evidence to link him to the crime, the Metropolitan police – pressured by the media outrage, and their obsession with justice – are determined to catch the guilty man before he kills again, and so, devise a plan to ensnare him...
Evocative, engrossing and emotive, Deceit dramatises the Metropolitan police’s controversial honeytrap operation that saw ambitious and determined undercover officer, Sadie Byrne– codenamed Lizzie James (Niamh Algar – Raised by Wolves, The Virtues) used as sexual bait, to entice the suspected killer to confess. Leading the case is a young Detective Inspector, Keith Pedder (Harry Treadaway – The Crown, Star Trek), who is under pressure to solve the case and enlists the nation’s infamous criminal profiler, Paul Britton (Eddie Marsan – Happy Go Lucky, Sherlock Holmes) to devise the undercover operation.
Written and produced by Emilia di Girolamo (Law & Order UK) this captivating and challenging drama shows the female perspective and explores the historic treatment of women.
Deceit beckons the crucial question: who is being deceitful, and who is being deceived?

For your chance to own 1 of 3 copies of Deceit DVD; simply answer the question below?

Deceit DVDs up for grab
This competition is now closed. Winners will be announced shortly.