Deutschland ’86 DVDs up for grabs 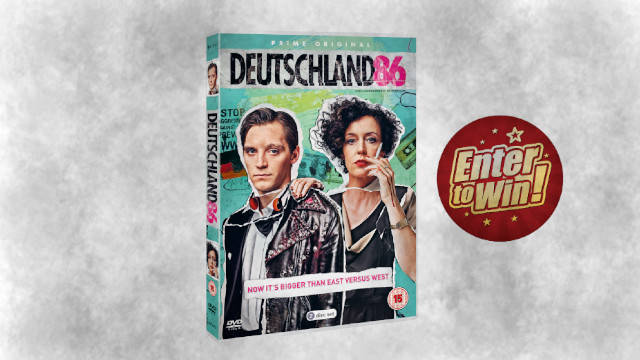 The Hugely anticipated Deutschland ’86 returns to More4 following the unparalleled success of the first series Deutschland ’83, which critics hailed as the start of a golden age for German TV. Alongside programmes like the much lauded Babylon Berlin Series One and Two, which has a season three in the pipeline, the timing is perfect for the next instalment of this cool, super stylish thriller. It is set to arrive on digital and DVD on 13 May 2019 from Acorn Media International alongside a stunning box DVD set of both series.

Deutschland ’83 saw viewing figures in excess of 2.5 million, exceeding that of the seminal Nordic noir hit The Killing and putting Germany at the forefront of must watch television. This epic coming-of-age story is set against real events, culture wars and the political realities of Germany in the early 1980s and sees Jonas Nay (Line of Separation) as a spy at the centre of this suspenseful Cold War thriller. The series also features an era defining 1980s pop soundtrack that hits all the right nostalgic buttons (99 Red Balloons anyone?).

Deutschland ‘86 is an epic 10-part drama that catapults audiences into the tumultuous political landscape of 80s East Germany. We join Martin Rauch (Nay) in 1986 and East Germany is broken, Perestroika is real, terrorism plagues Europe, the AIDS crisis intensifies and the struggle against apartheid rages on. Banished for his sins in 1983, Rauch wallows in limbo until his Aunt Lenora (Maria Schrader – Aimée & Jaguar, The City and the City) conscripts him into her plan to drum up hard currency abroad. They set off on an adventure through Africa, Western Europe and finally home to East Germany. Can mafioso-style Capitalism save Communism just in the nick of time?

For your chance to own 1 of 3 copies of Deutschland ’86 DVD; simply answer the question below:-

Deutschland
This competition is now closed. Winners will be announced shortly.