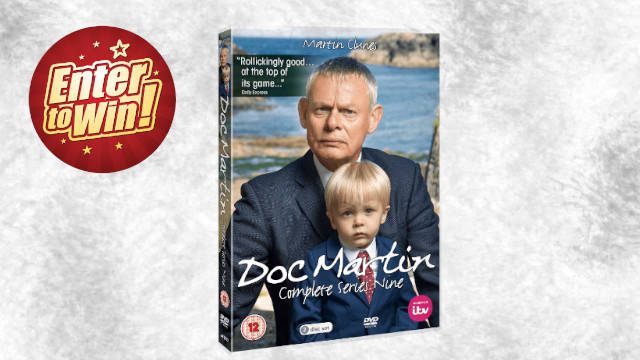 Dr. Martin Ellingham (Clunes - Men Behaving Badly, Warren), is back for eight new episodes of the ratings winning drama as the sole GP of a sleepy town. With a brusque bedside manner and a phobia of blood, he continues to treat and challenge the community of the idyllic hamlet of Portwenn in Cornwall.

Caroline Catz (DCI Banks, In Fabric) once again stars as Doc Martin’s wife Louisa Ellingham, who has resigned from her job as headmistress at the local school to pursue a new career in child counselling. Concerned that their son James Henry is becoming too much like his father, she considers whether they should try for a little brother or sister. But with her career change and Martin under review from the General Medical Council following complaints from his patients, is now the right time?

Settle in for your dose of Doc Martin – on the doctor’s orders.

For your chance to own 1 of 5 copies of Doc Martin Series Nine DVD; simply answer the question below:-

Doc Martin
This competition is now closed. Winners will be announced shortly.