Dublin Murders DVDs up for grabs 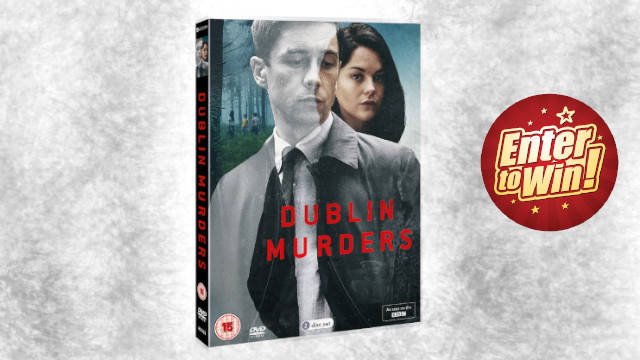 Adapted from leading crime novelist Tana French’s internationally bestselling books, Dublin Murders is a darkly enthralling new drama, set to grip audiences when it airs on BBC One and arrives on DVD and digital this winter from Acorn Media International.

Screenwriter extraordinaire Sarah Phelps (The ABC Murders, Great Expectations), brilliantly blends the first two novels in the Dublin Murder Squad series – In The Woods and The Likeness – to deliver an engrossing eight-part series full of psychological mystery and darkness, with its roots sunk deep in Ireland’s past.

Summer 2006, at the height of the Celtic Tiger financial boom…two driven detectives Rob Reilly (Scott) and Cassie Maddox (Greene), are called in to investigate a child’s murder in Knocknaree, Dublin, but there’s more to this disturbing case than meets the eye.

On an altar in the middle of an archaeological site lies the body of a local teenage girl, a talented young ballet dancer, Katy Devlin, 13.

Knocknaree is an area blighted by poverty and unemployment for generations. The historical site is under threat from developers looking to build a new motorway. This is the not the first loss to afflict the community…21 years earlier, in a very different Ireland, three children went missing. Only one came back alive and the crime was never solved…could this horrendous new crime be connected?

The Dublin Murders devastated a community and as the investigation deepens, old wounds that never properly healed are about to be ripped open.

For your chance to own 1 of 5 copies of Dublin Murders DVD; simply answer the question below:

Dublin Murders
This competition is now closed. Winners will be announced shortly.

Win a pair of tickets to The Stitch Festival at the Business Design Centre, London