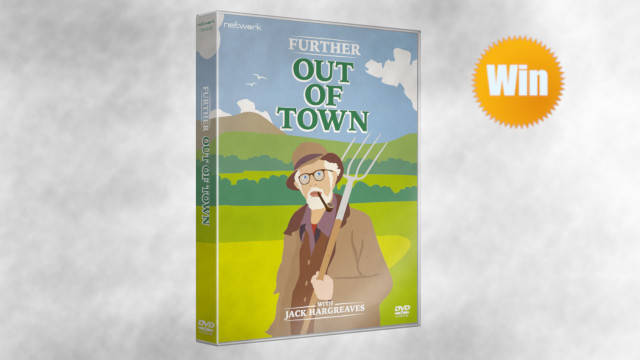 Network Distributing are pleased to present the newly restored and refreshed Further Out of Town on Blu-ray, DVD & Digital 6th July. For over twenty years Jack Hargreaves presented the series Out of Town, which saw him exploring rural life in Britain with his easy-going presentation style and wide-ranging knowledge and love of the countryside enthralling viewers of all persuasions.

Following extensive restoration work comes a brand-new series showcasing digitally restored film sequences from this hugely popular television programme with new filmed introductions by Jack’s stepson Simon Baddeley. Further Out of Town looks back to memorable snapshots of a time ‘before the world changed’. Stepping into his stepfather’s boots to film new interlinks Simon sought not to imitate Jack but to find a suitable version of Jack’s relaxed style in front of the camera that millions of watchers had been so fond of. Remarking on the project he has said:

“I'm delighted these episodes of Out of Town have been recalled to life as Further Out of Town. After a journey spanning over 10 years I’ve persevered in resurrecting my stepfather’s work, so his shrewd environmental understanding, can be brought to new audiences as well as those already so familiar with Jack’s engaging broadcasts. Working alongside Network and their restoration team has been a fantastic experience. To see what has been produced from the surviving materials is truly eye-opening. Stepping into my beloved stepfather’s boots to present this refreshed series has been a great challenge - one I’ve taken with great respect in order to gain the essence of what Jack set out to do all those years ago. Continuing his legacy with Further Out of Town is an opportunity for viewers to take a step back, relax and engross themselves in a calm approach to the world around them. Something that, in recent times, is a feeling worth spreading.”

The new episodes take in numerous locations in and around the New Forest to Brownsea Island in Poole Harbour, off the coast of Brighton, South East London, as well as the coast of Stornoway and Andalusia in Spain. Exploring pests in the garden, a horse market in the city, butterflies, fishing and more they encompass a wide variety of country and outdoor life activities.

Further Out of Town is a fantastic opportunity for fans old and new to rediscover Jack’s work. Heralded as a maverick naturalist TV presenter Jack brought attention to the countryside, rural life and traditions to millions of homes across the UK with a love for nature and the environment that never wavered. His relaxed and calming presenting style was an inspiration to his viewers to appreciate country as well as highlighting the distortions in relations between the city and the countryside, which sadly do still exist today. In the current climate we’re encouraged to slow down, pause and reflect, a sentiment that Jack would have whole heartedly approved of, noting in one of the episodes the urging of W. H Davies’ poem Leisure that what we all need is time to ‘stand and stare’.

For your chance to own 1 of 3 copies of Further Out of Town DVD; simply answer the question below:

Further Out of Town
This competition is now closed. Winners will be announced shortly.