In Bruges Limited Edition Blu-rays up for grabs 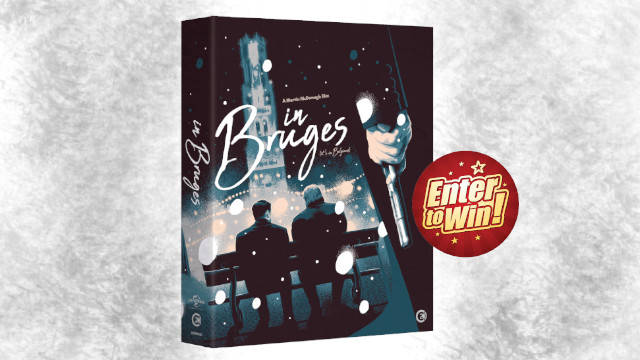 Hilariously dark hitman movie with a heart, In Bruges, is out now on Limited-Edition Blu-ray release, complete with brand new special features courtesy of Second Sight.

From award-winning director Martin McDonagh (Three Bill Boards Outside Ebbing Missouri), the film was originally released in 2008 and has gone on to earn cult status. It sees Brendan Gleeson (Cold Mountain) and Colin Farrell (The Lobster) in career defining, critically acclaimed performances, as a pair of hired heavies sent to lie low in the Belgian city after a botched hit.

Ralph Fiennes (The Grand Budapest Hotel) stars as their boss and the line-up also features Elizabeth Berrington (Good Omens), Clémence Poésy (The Tunnel) and Eric Godon (The Missing).
Following a job that’s gone very badly wrong, two hitmen Ray (Farrell) and Ken (Gleeson) are sent to Bruges by their boss Harry (Fiennes) and told to hide out and await instructions. Ken falls in love with the cobbled streets and canals of the picturesque city but for Ray it’s torturous boredom and he spends his time upsetting everyone he encounters from locals and tourists. When the call finally comes from Harry it may not be the ticket out they were hoping for.

In Bruges Limited Edition features stunning packaging, with new artwork by Thomas Walker, who also designed the exclusive cover for the Faber and Faber screenplay included with the release, alongside a 50-page soft cover book. There’s a slew of special features including McDonagh’s Oscar Winning Short Film Six Shooter in HD and more.

Pack your things it’s time to escape In Bruges.

For your chance to own 1 of 2 copies of In Bruges Limited Edition Blu-rays; simply answer the question below:-

In brugesRalph Fiennes
This competition is now closed. Winners will be announced shortly.