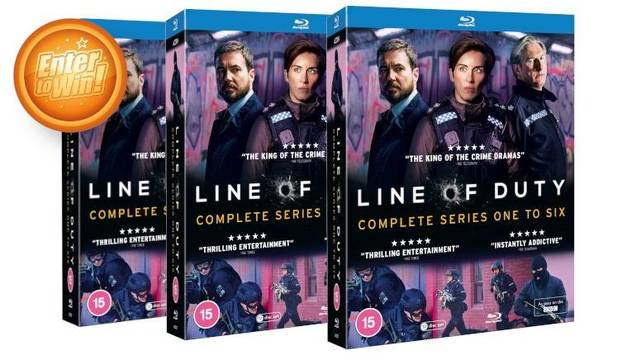 Described as ‘The King of the crime dramas’ and an ‘Exhilarating, white-knuckle ride’ the internationally acclaimed ratings record-breaker Line Of Duty finally gets the high-def treatment as Line of Duty Complete Series One To Six is set to be released as a bumper Blu-ray box set release.

Following its rollercoaster return to the BBC earlier this year, with its highly anticipated sixth series, the explosively thrilling TV behemoth, from award-winning scribe Jed Mercurio (Bodyguard, Bloodlands), can now be enjoyed in full on Blu-ray from 12 July 2021.

This addictively intense police drama has earned a legion of fans with its ‘nail biting action, complex characters, and intricate plot’ (TV Guide). At anti-corruption unit AC-12, Superintendent Ted Hastings leads his team of DS Steve Arnott and DC Kate Fleming in their suspected police corruption investigations­…in the process, they begin to uncover a conspiracy that reaches to the very highest echelons of the force.

Each series sees a phenomenal acting talent take on the role of the police officer being investigated and takes us on a ride that keeps us guessing with its heart-stopping interrogations and intricate plots. The show features a stand-out cast including Craig Parkinson, Neil Morrissey, Maya Sondhi, Nigel Boyle, Anna Maxwell Martin, Polly Walker and Shalom Brune-Franklin, who play some of the series’ most memorable characters.

For your chance to own 1 of 3 Line of Duty Complete Series One To Six bumper Blu-ray box sets; simply answer the question below:

Line of Duty
This competition is now closed. Winners will be announced shortly.