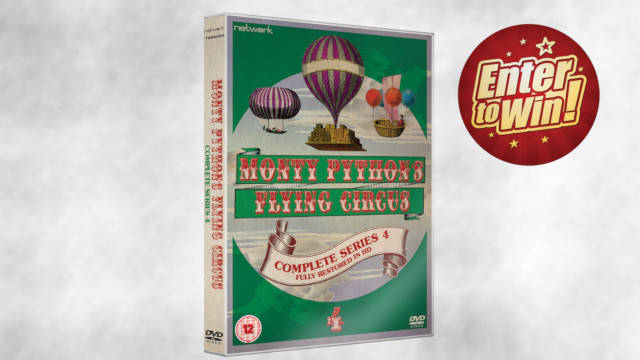 Series 4, made after the group had filmed their first ‘proper’ feature film Monty Python and the Holy Grail, marked the departure of John Cleese who had expressed a desire to leave following Series 3. Comprised of six episodes this final series included evermore surrealist situations as the Garibaldi, Fanshaw-Chumleigh and Jodrell families were pitted against each other for The Most Awful Family competition of 1974 and Graham Chapman transforms into Mr. Neutron - the most dangerous and terrifying man in the world – hiding in the suburbs to escape US surveillance and falling in love with old Mrs. Scum…

Previously edited sketches have been returned to their original length, while filmed sequences and Terry Gilliam's animations have been newly scanned in High Definition, adding unimaginable depth and clarity to classic moments. This unrivalled restoration has been produced from the best available materials, painstakingly restored... and includes just the right amount of lovely spam, wonderful spam...

THE RESTORATION: After nearly a decade of research and planning, this is a ground up restoration by Network’s award-winning in-house team working from the best available materials – from first generation 2-inch videotape masters to surviving negative and print film material, scanned in 2K. The wildly varying picture sources have been graded scene-by-scene and intensively cleaned up. State of the art upscaling of Standard Definition videotape has been deployed with careful use of noise reduction for both video and film grain, resulting in a vastly improved viewing experience all round on Blu-ray High Definition format, far exceeding anything previously available. A peak at the incredible restoration work can be seen HERE, and Terry Gilliam’s reaction when he dropped by the studio HERE.

For your chance to own 1 of 2 copies of the Monty Python’s Flying Circus – The Complete Series 4 DVD; simply answer the question below:

Monty Python
This competition is now closed. Winners will be announced shortly.