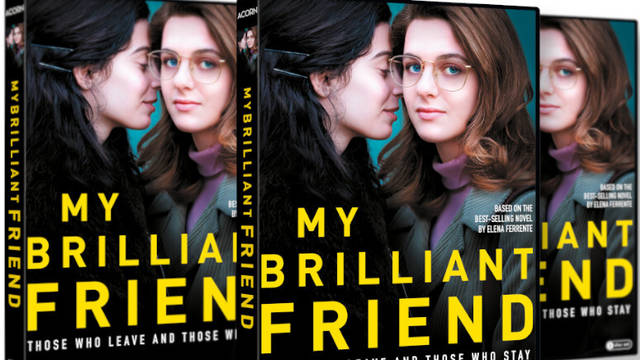 The award-wiinning Neapolitan novels by renowned author Elena Ferrante tell an epic tale of love, loss, hardships, and the enduring power of female friendship with breathtaking vigour. After its run on Sky, the third series of this Italian adaptation My Brilliant Friend: Those Who Leave and Those Who Stay arrives on DVD and digital 2 May from Acorn Media International.

Writer Elena Greco’s best friend Lila has disappeared without a trace, so Elena begins to write the story of their lives growing up together in a mob-ruled, poverty-stricken, and vibrant neighbourhood in 1950s Naples. As children, Elena (Elisa Del Genio) and Lila (Ludovica Nasti) learn to rely on each other more than anyone else, and their friendship is put to the test as financial disparities provide them with very different opportunities in life.

Series two sees Elena (Margherita Mazzucco) and Lila (Gaia Girace) grow into beautiful young women navigating the trials and tribulations of marriage, university, abuse, motherhood, critical acclaim, and jealousy – all amidst the changes of the swinging sixties. Their paths repeatedly diverge and converge – their friendship growing ever more entangled, complex, and forceful. Set in the 1970s, series three finds Lila struggling to hold her life together as a single mother, with an unrelenting job in a factory after leaving her abusive husband. Meanwhile, having spread her wings to study in Pisa, Elena has become a successful author and is welcomed into an affluent and prosperous world.

Elena and Lina must navigate a stream of hopes and uncertainties in a rapidly changing world with a seemingly limitless number of possibilities. They drift in and out of one another’s lives as they contend with new challenges – but as ever, remain bound to one another by a ferocious and unbreakable bond, where passions and rivalries flicker beneath the surface...

For your chance to own 1 of 3 copies of My Brilliant Friend: Those Who Leave and Those Who Stay DVD; simply answer the question below:

My Brilliant Friend: Those Who Leave and Those Who Stay DVDs up for grabs
Please log in or register to enter this competition.