Oil In The Blood Blu-rays up for grabs 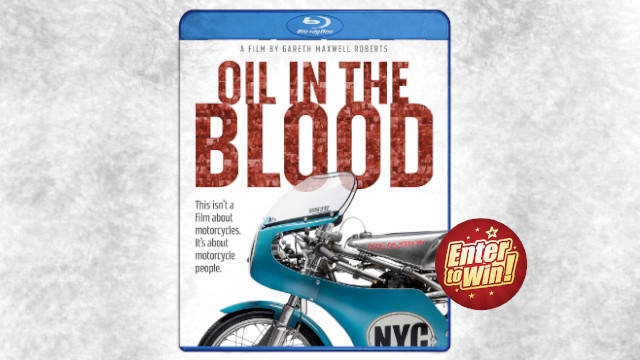 Director and life-long biker Gareth Maxwell Roberts takes us on a fascinating road trip to discover the rarely seen on screen, world of contemporary custom motorcycles and the people who have Oil In The Blood. This new rip-roaring feature documentary takes us on an eye-opening thrill ride and is available now on Blu-ray, DVD and on digital.

This little-known scene has experienced a huge renaissance in recent years, and what was once a niche subculture now bears a significant influence on the international mainstream motorcycle industry. You can experience the wonderful world of custom motorcycles as Oil In The Blood is out now on courtesy of Revelation Films.

Over three years, Roberts and producer Lucy Selwood travelled the globe to interview those at the very heart of this captivating culture.  From Britain and Europe, to Japan, Australia, The Far East, Africa and the US, they have spoken to hundreds of people from bike builders, riders and journalists to the artists and racers, all who have one thing in common…a passion for custom motorcycles.

The film shows mind-blowing footage including a collaboration between Harley Davidson and maverick bike builders El Solitario in the Sahara, flat track racing in dusty bowls and indoor arenas, ice racing in Wisconsin and the Alps, and the American Wall of Death in the Texas sun.

Experience the Bike Shed in London and Paris, The Malle Mile, Wheels & Waves in Biarritz, The Trip Out, The Brooklyn Invitational, The Distinguished Gentleman’s Ride in London and New York, Throttle Roll in Sydney, Indian Larry’s Block Party, Dirt Quake, Snowquake, The Malle Mile and The Trip Out in rural England, The One Moto Show in Portland, Mama Tried in Milwaukee, Mooneyes in Tokyo and The Hand Built Show in Austin.

For your chance to own 1 of 3 copies of Oil In The Blood Blu-ray; simply answer the question below:

Oil in the Blood
This competition is now closed. Winners will be announced shortly.