Our Girl Series 4 DVDs up for grabs 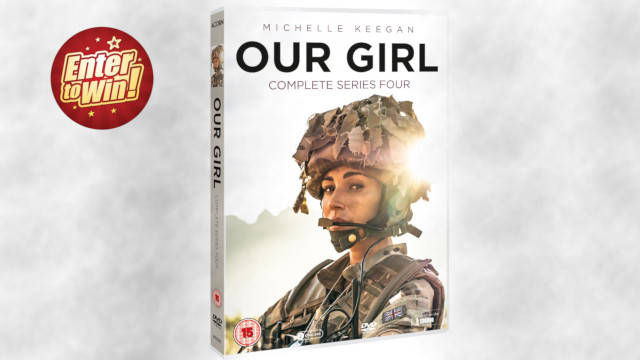 After the heart-stopping cliffhanger of Our Girl Series 3, we’re thrilled that our mighty military medic Georgie is back on screen for a fourth series. But it’s hello and goodbye to TV favourite Michelle Keegan as it’s her final mission in the hugely popular BBC drama. Following its run on BBC One, Our Girl Series 4 is set to arrive on DVD and digital alongside Our Girl Series 1 – 4 Complete on 11 May 2020 from Acorn Media International.

As 2 Section prepares to return to Afghanistan, Lance Corporal Georgie Lane (Keegan – Coronation Street), still haunted by the devastating events of her last tour, can’t face the thought of returning. Keen to focus on her training role in the UK, she sends trainee medic Mimi (Amy-Leigh Hickman – Ackley Bridge) in her place. But with Mimi’s confidence dipping, Georgie’s compelled to make the journey to support the new recruits, could it be a decision she’ll regret?

When the team is caught up in a shocking suicide attack, they accidentally discover the perpetrators of the murder of one of their own, and someone very close to Georgie’s heart. Can she control her need for revenge?

There’s the chance to revisit the complete thrilling series from the beginning with Our Girl Series 1 – 4 Complete. Lacey Turner (Eastenders) is the titular, Our Girl Molly Dawes in Series 1, with Michelle Keegan taking over as Our Girl Georgie in Series 2 and 3, including  tours in Kenya, Nepal and Nigeria and not forgetting the enthralling storylines featuring fan favourites Luke Pasqualino (The Musketeers) as Elvis and Ben Aldridge (Fleabag) as Captain Charles James.

For your chance to own 1 of 5 copies of Our Girl Series 4 DVD; simply answer the question below:

Our Girl
This competition is now closed. Winners will be announced shortly.