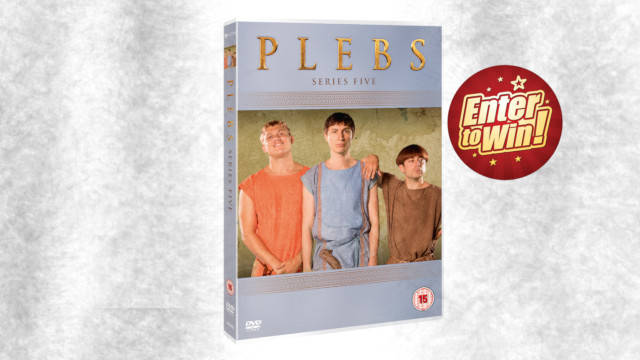 When in Rome, de de de…do as the Romans do! Here come the Romans in the hilarious comedy Plebs, which returns for its fifth series on ITV2 before marching on to DVD alongside Plebs Series 1 – 5 DVD Box Set on 9 December 2019 courtesy of Acorn Media International.

Plebs follows the lives of three hapless young men from the suburbs as they try to get laid, hold down jobs and climb the social ladder in the big city...of Rome in 23BC. Penned by Sam Leifer (How Not to Live Your Life) and Tom Basden (Fresh Meat) and starring Tom Rosenthal (Friday Night Dinner), Ryan Sampson (Brassic) and Jonathan Pointing (London Kills) alongside a stellar cast and inspired guest stars.

Series five sees Amanda Holden (Wild at Heart) feature as lusty aristocrat Rufina who takes a liking to Jason (Pointing) when he gate-crashes a banquet…and he doesn’t seem to mind too much. Marcus (Rosenthal), Aurelius the water man (Basden) and lazy slave Grumio (Sampson) are still trying to turn the Crown and Toga into the trendiest nightspot in the city, even if it means getting in with a rowdy bunch of sports hooligans including Leo Gregory (Green Street Hooligans).

With Marcus wooing Gloria (Ellie Taylor – The Mash Report) who runs the laundrette next door, Jason and Aurelius trying their luck at a male escort agency, and Grumio inventing the first hands-free parasol: The Grumbrella, you know you’re in for a right Roman riot.

For your chance to own 1 of 5 copies of Plebs (Series Five) DVD; simply answer the question below:-

Plebs
This competition is now closed. Winners will be announced shortly.