Stars in Your Eyes DVDs up for grabs 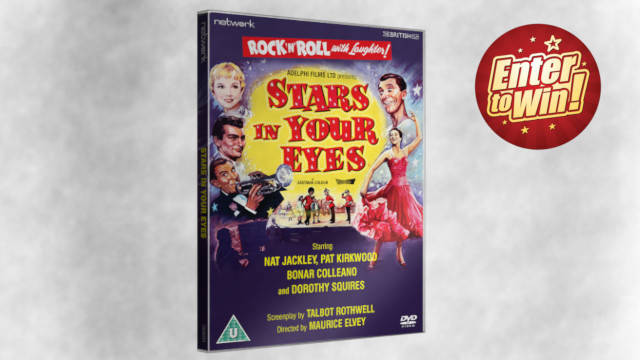 The quintessential British comedy musical romance, Stars in Your Eyes is a love letter to the last days of variety that has lost none of its warmth and heart in the six decades since it was first filmed. A group of feisty, talented young performers pool their resources and buy a dilapidated theatre to showcase their acts – but unscrupulous property developers also want the theatre and resort to dirty tricks to disrupt the first night's performance!

With fabulous musical numbers, sparkling comedy routines and tear-jerking romance it showcases a terrific cast of stars of the day, and stars in the making: Pat Kirkwood, Dorothy Squires (in her only big screen appearance), Nat Jackley and Bonar Colleano feature alongside Carry On’s Joan Sims, Jimmy Clitheroe, Freddie Frinton and Vera Day.

Stars in Your Eyes is directed by the most prolific director in British cinema history Maurice Elvey from a script by Talbot (Carry On) Rothwell. Adelphi Films' classic feature has not been seen publicly for over 50 years and is now available for the first time in a brand new High Definition restoration from original film elements in its original Camerascope theatrical aspect ratio.

This release also includes these special features from the Adelphi Films collection:

Stars in Your Eyes is available on Blu-ray and DVD exclusively from networkonair.com 14 December 2020

For your chance to win 1 of 5 copies of Stars in Your Eyes DVD; simply answer the question below:

Stars in Your Eyes
This competition is now closed. Winners will be announced shortly.