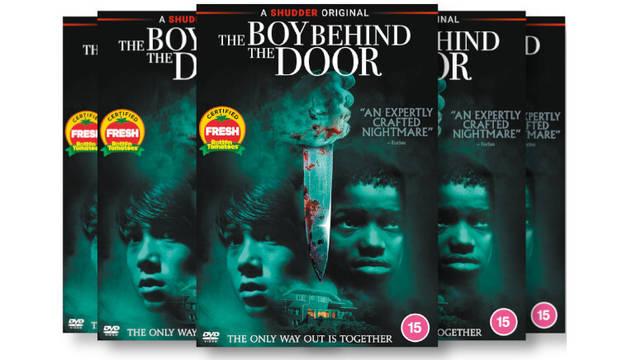 The Boy Behin The Door is the dramatic and evocative feature film debut from writing-directing duo David Charbonier and Justin Powell. This Shudder Original from the talented team – who went on to create the critically acclaimed horror The Djinn – has been described by the NME as ‘practically flawless’ and is now set for its UK Blu-ray, DVD and digital release, from Acorn Media International. The film, set for its UK physical premiere on 2 May 2022, is unrelentingly fast-paced and conjures up the nerve-jangling sense of dread of a childhood nightmare.

A night of unimaginable terror awaits twelve-year-old Bobby (Lonnie Chavis – This Is Us) and best friend, Kevin (Ezra Dewey – The Djinn) when they are abducted on their way home from school and taken to a house surrounded by miles of bleak, dark country in every direction. Bobby manages to escape his confines and quietly navigates the dark halls in a bid for escape, but when he hears Kevin’s screams, he realises he can’t leave his friend behind...

Avoiding his kidnapper (Kristin Bauer van Straten – True Blood) and her menacing acquaintance (Micah Hauptman – Everest) at every turn and with no means of calling for help, Bobby embarks on a high-stakes rescue mission, determined to get himself and Kevin out alive...or die trying.

Filmed from the perspective of the two young protagonists The Boy Behind the Door tackles an undeniably dark and disturbing subject matter, while giving audiences a gripping and commanding tale of endurance and alliance in the face of evil. What ensues is a suspenseful, chilling and expertly crafted game of cat and mouse, so tense that viewers will watch with the same trepidation as The Boy Behind The Door.

For your chance to own 1 of 5 copies of The Boy Behind The Door DVD; simply answer the question below:

The Boy Behind The Door DVDs up for grabs
Please log in or register to enter this competition.