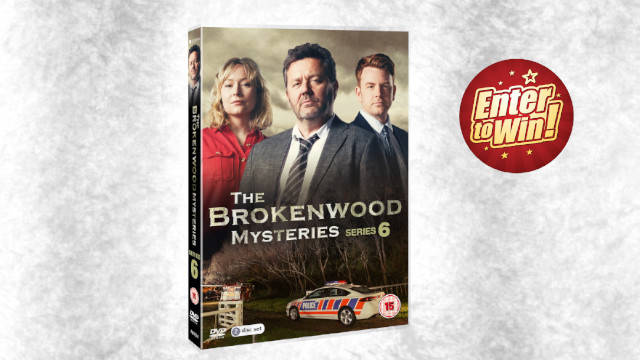 Brokenwood, New Zealand: Population 5000 and declining – slowly – one by one, or two by two, depending on the murder rate that week. Series Six of hit New Zealand crime drama The Brokenwood Mysteries recently aired on UKTV’s Drama Channel, and arrives on DVD 17 February 2020, alongside the Series 1 to 6 Box Set, courtesy of Acorn Media International.

Four-times-divorced, country-music-loving, big city cop Detective Inspector Mike Shepherd (Neill Rea – Go Girls) has settled into the rural town of Brokenwood. He was first brought in to solve the case of a dead farmer suspected of foul play, and never left…but there’s no rest for the wicked and the crimes keep on coming. Along with his by-the-book young partner Detective Kristin Sims (Fern Sutherland – The Almighty Johnsons), Mike delves into the quaint community’s dark underbelly, where shadows lurk beneath the surface.

A murder at a Victorian dress-up Steampunk event, a renowned crime author falling victim to a killing right out of his books, an animal activist found dead on the first day of duck hunting season, and run-ins with some familiar faces as they are called in to investigate a suspicious suicide at Brokenwood Women’s Prison – can Mike and the team get to the bottom of these gruesome goings-on?

Joined on the cases by green Detective Constable Sam Breen (Nic Sampson – The Luminaries) who looks up to Mike, the department’s pathologist Dr Gina Kadinsky (Cristina Serban Ionda – Filthy Rich), a Russian with a dark sense of humour, and invaluable resource for local gossip Jared Morehu (Pana Hema Taylor – Spartacus), the best in the business are on hand to solve these mysterious murders.

Murder lurks in the most unlikely of places in The Brokenwood Mysteries.

For your chance to own 1 of 5 copies of The Brokenwood Mysteries (Series Six) DVD; simply answer the question below:

Brokenwood Mysteries
Please log in or register to enter this competition.

Under the Shadow Limited Edition Blu-ray Boxsets up for grabs