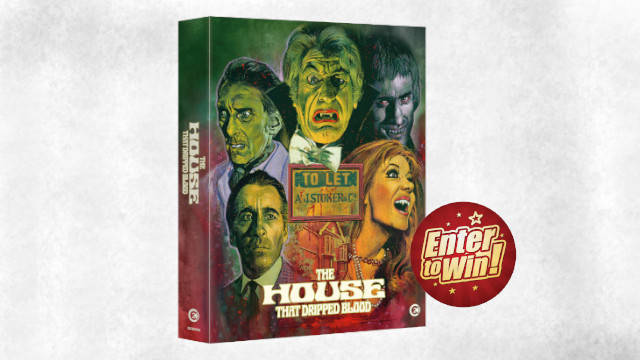 Seminal Amicus horror The House that Dripped Blood, from Peter Duffell in his directorial debut and written by renowned screenwriter Robert Bloch (Psycho), is set for one of Second Sight’s renowned must-have Limited Edition Blu-ray releases this Summer.

This star-studded anthology is presented in a stunning box set featuring original artwork from Graham Humphreys alongside a whole host of fantastic new special features including new essays from horror aficionados and a 40-page booklet and is available from 29 July 2019.

Scotland Yard’s Inspector Holloway (John Bennett – Watership Down, The Fifth Element) investigates a mysterious mansion with a ghoulish history and a chilling fate for its occupants in these four tales of terror…

Method for Murder stars Denholm Elliott (Indiana Jones, A Room with a View) as a hack horror writer haunted by visions of the murderous, psychopathic central character of his latest novel.

Peter Cushing (The Horror of Dracula, Star Wars) and Joss Ackland (The Hunt for Red October, Lethal Weapon 2) feature in Waxworks as a pair of friends fixated with a macabre museum that appears to contain a model of a woman they both knew.

Horror icon Christopher Lee (The Wicker Man, Lord of the Rings) appears as a severe widower who appears to mistreat his young daughter in Sweets to the Sweet. But when a well-meaning teacher intervenes, will she realise her mistake in time?

Jon Pertwee (Doctor Who, Carry on Cleo) plays a temperamental horror film actor in The Cloak. When he buys a cloak for his vampire costume from a mysterious local vendor, his co-star (Ingrid Pitt – The Vampire Lovers, Countess Dracula) soon notices its strange powers.

Terror awaits you in every room of The House That Dripped Blood…enter if you dare.

For your chance to own 1 of 2 copies of The House That Dripped Blood Limited Edition Blu-ray Box Set; simply answer the question below:-

The house that dripped BloodChristopher LeePeter Duffell
This competition is now closed. Winners will be announced shortly.