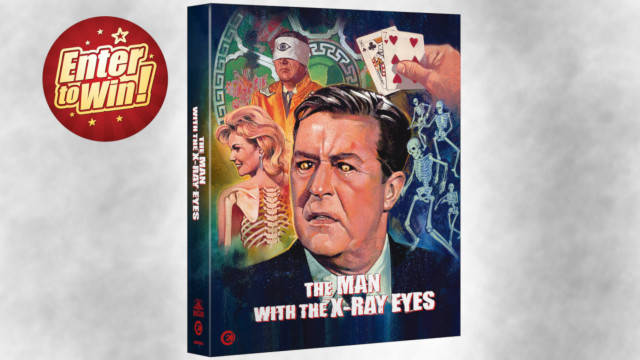 Get ready for a visual treat as Second Sight release the first ever UK Blu-ray release of Roger Corman’s seminal horror sci-fi classic The Man With The X-Ray Eyes and we have 3 copies up for grabs.

This 1960s cult favourite is a sight to behold in a newly restored Limited Edition Box set release, featuring stacks of brand new special features, including a new interview with director Roger Corman, commentaries and much more, please see details in full below. The set arrives on 4 May 2020 complete with new artwork a reversible poster and a soft cover book.

Obsessed with expanding the powers of human sight, renowned scientist Dr James Xavier aims to develop a formula that will allow the user to see beyond the visible spectrum. Despite warnings from those close to him he experiments on himself and finally perfects a serum that gives him the power to see through solid objects. But his ambitions turn to obsession. No longer able to control the effects, his vision extends beyond the realms of human comprehension until he finally sees more than he can bear.

There’s no hiding from The Man With The X-Ray Eyes, he’ll see right through you.

For your chance to own 1 of 3 copies of The Man With The X-Ray Eyes Limited Edition Blu-ray Box Set; simply answer the question below:

The man with the X ray Eyes
This competition is now closed. Winners will be announced shortly.