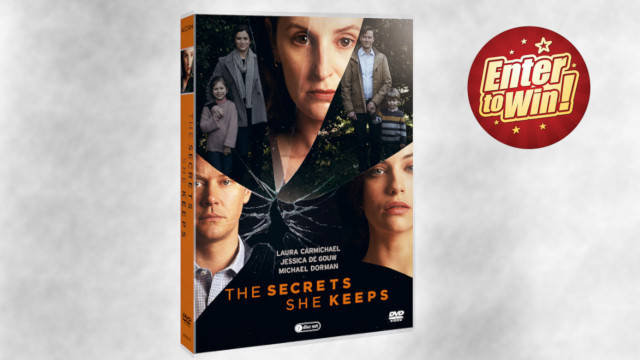 The cat is out the bag…Brand-new nail-biting drama The Secrets She Keeps is set to have viewers hooked this summer. This six-part small-screen adaptation of Michael Robotham’s best-seller follows the lives of two pregnant women in wildly different circumstances, whose meeting may be more than a coincidence. This ‘domestic noir’ drama arrives on digital 8 July and DVD 10 August 2020 from Acorn Media International, following its run on BBCOne.

Successful mummy-blogger Meghan (Jessica De Gouw – The Crown, Vienna Blood) meets shelf-stacker Agatha (Laura Carmichael – Downton Abbey, The Spanish Princess) in the supermarket of her affluent Sydney suburb. The pair are both pregnant, bonding over the similar due dates of their babies, but as they grow closer, Agatha becomes more and more obsessed with Meghan’s “perfect” life. However under the surface, problems with her high-flying TV exec husband Jack (Michael Dorman – Patriot, The Invisible Man) and tension with his best friend Simon (Ryan Corr – Cleverman, Hacksaw Ridge) mean Meghan is keeping plenty of secrets of her own…

Meanwhile, the father of Agatha’s child, Hayden (Michael Sheasby – The Luminaries, A Place to Call Home) is away on duty and might not be as excited about the baby as Agatha is, forcing her to confront the question: when the life you want isn’t yours, how far will you go to get it?

A fascinating exploration of female friendship, urban class divide, social media, and motherhood, all wrapped up in an edge-of-your-seat thriller, you’ll be guessing The Secrets She Keeps until the very end.

For your chance to own 1 of 5 copies of The Secrets She Keeps DVD; simply answer the question below:

The Secret She Keeps
This competition is now closed. Winners will be announced shortly.