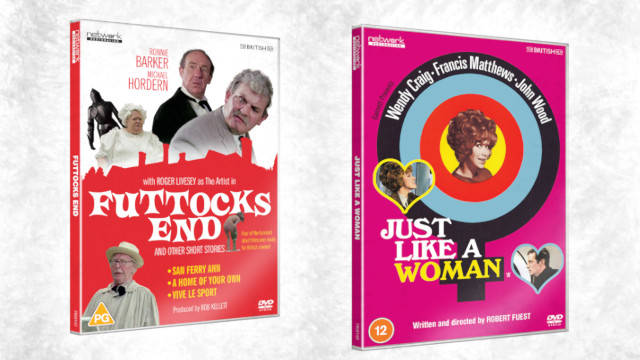 New to Network Distributing’s The British Film label this summer, comes a duo of releases that will take you on a silly and psychedelic trip through 1960s British comedy with Futtocks End and Other Short Stories and Just Like a Woman, from prolific director, producer and writer Bob Kellett on Blu-ray, DVD + Digital 5th July.

A notable presence in the British film industry throughout the 1960s-70s, Bob Kellett was known for directing classic British comedy feature film spin-offs, including Up Pompeii and its sequels (1971-72) with Frankie Howerd, The Alf Garnett Saga (1972) with Warren Mitchell and Are You Being Served? (1977) with John Inman. Futtock’s End and Other Short Stories was his foray into fiction films and includes a collection of four of the funniest short films ever made for British comedy. These wordless ‘sound effect comedies’ utilised the talent of their hilarious ensembles, harking back to the silent era comedies incorporating slapstick and music. Drawing from a band of British talent, they feature Ronnie Barker, Richard Briers, Bernard Cribbins, Barbara Windsor, David Lodge, Wilfrid Brambell, Joan Sims, Michael Hordern and many more.

Network have previously released the Bob Kellett directed feature Spanish Fly and series Space 1999 for which he directed three episodes. To explore more from Network, visit The British Film.

For your chance to win 1 of 2 bundles of ‘Futtocks End and Other Short Stories’ & ‘Just Like a Woman’ DVD; simply answer the question below:

Futtock's End and Other Short StoriesJust Like a WomanBob Kellett
This competition is now closed. Winners will be announced shortly.