Warren DVDs up for grabs 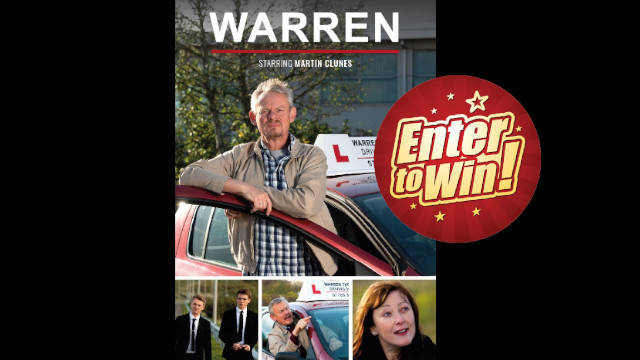 TV favourite Martin Clunes returns to our screens as another man behaving badly: Warren, a hilariously pedantic driving instructor who thinks the world is against him, in prime time sitcom currently airing on BBC One and coming to DVD and digital on 13 May courtesy of Acorn Media International.

This comedy drama centres around Warren Thompson, who suddenly finds himself in his mid-50s, forced to up sticks from the south to Preston when his partner Anne’s (Lisa Millett – Robin Hood, Peterloo) father falls ill. Not blessed with patience, empathy, or any kind of paternal instinct whatsoever, cantankerous, blunt and grumpy, he just about tolerates his students, not to mention the two teenage stepsons he never wanted.

To put it delicately, Warren’s naturally difficult personality means he’s constantly finding himself in sticky situations. Set in his ways, he’s happy with a clean house, a neat garden, and a nice cup of tea…but always seems to end up on the verge of absolutely losing it. From neighbourly disputes to vendettas in both his personal and professional life, this uniquely British, crabby comedy hero will have you clutching your sides and clutching your pearls in equal measure.

So stick on your L plates and get ready for a bumpy ride.

For your chance to own 1 of 5 copies of Warren DVD; simply answer the question below:-
Prize Draw Closes: 26 May 2019

Warren
This competition is now closed. Winners will be announced shortly.