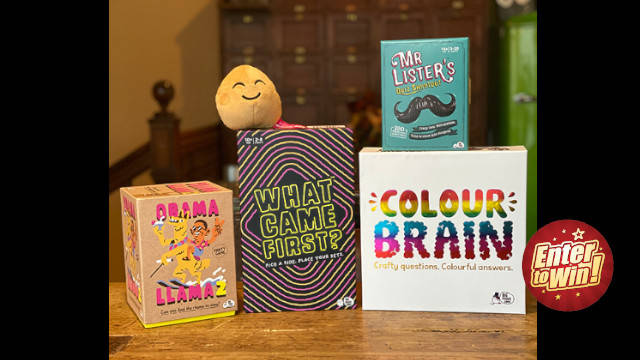 Big Potato Games is an indie board games company based in Shoreditch, London. They create family and adult party games that are easy to learn and quick to play.

Colourbrain is a colourful trivia game with a twist - you’re given you all the answers before you start. All you have to do is work out which of the 11 Colour Cards in your hand correctly answers one of the crafty, colourful questions. Get it right and you could be in luck. Now you just need the other teams to get it wrong to walk off with the points, while they turn green with envy.

Mr Lister is a quick-fire trivia party game. Each round, Mr Lister will ask a question with multiple answers and each team will get three shots to hit a correct answer. If they’re lucky, they’ll head straight to the Last Chance Saloon to play the impossible question.

Obama Llama 2 is the sequel to Big Potato’s original best-selling game, and it was invented by Radio 1 DJ Matt Edmondson. In this celebrity-rhyming party game, the aim is to act out and describe lots of rhyming charades while your team tries to guess them. From ‘King Kong playing ping pong” to “A Pot Noodle marrying a poodle”, the rhymes are even more ridiculous than last time – if that’s possible.

What Came First is a brand new game for 2019 and it does exactly what it says on the tin. Flush toilet or stop sign, mayo or ketchup, Statue of Liberty or Eiffel Tower… which one came first? If you think you know then it’s time to put your money where your mouth is. The more you wager, the more you win and the faster you move around the track – but get it wrong and you’ll be heading backwards in a hurry. The first team to cross the Finish Line wins.

For your chance to win 1 of 3 Bundles of Big Potato Games; simply answer the question below:

Big Potato Games
This competition is now closed. Winners will be announced shortly.