Win a bundle of The Nineties and McLaren on DVD 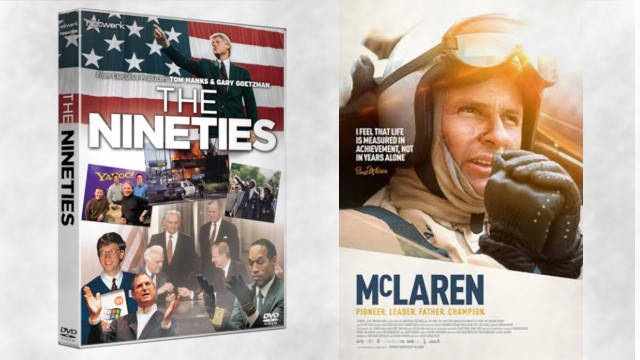 The Nineties: A decade that saw technological triumphs and terrorist tragedies, inter-racial conflict in Los Angeles to New York and all points in between, the grunge revolution and hip-hop’s ascendance to the mainstream. A series of extraordinary events crowded across the world stage, including the collapse of the Soviet Union, the reunification of Germany and the end of apartheid in South Africa, while everything from culture to commerce was irrevocably altered as the world went online, and a groundbreaking, genre-bending new era of television change the world forever. This epic new documentary series uses rare and archival footage alongside interviews with renowned journalists, historians, musicians and television cast and crew to give us a window into the decade that set the stage for the way we live today. Produced by Emmy-award winning Tom Hanks, Gary Goetzman and Mark Herzog.

McLaren: The name McLaren is synonymous with motor racing excellence and stands today as a symbol for automotive superiority. Yet what is less known is that the brand was the creation of one young man from New Zealand – a pioneer who followed his dream and who against all odds led a team to greatness and himself to become a motorsport champion and hero. Despite the tragic end to his life, Bruce’s legacy lives on and his vision, passion and drive to innovate continues to be at the heart of advanced motor engineering to this day. A truly inspirational story of a young boy from humble birth who dared to take on the elite world of motor racing and win.

To win this bundle of The Nineties and McLaren on DVD; simply answer the question below:

The Nineties and McLaren
This competition is now closed. Winners will be announced shortly.