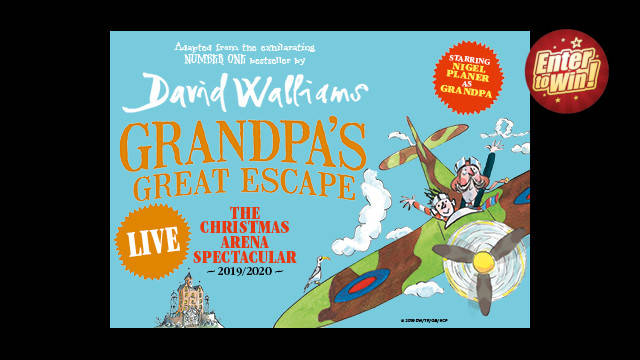 Many years ago, Grandpa was a World War II flying ace. But when he is sent to old folk’s home Twilight Towers – run by sinister Matron Swine – it’s up to Grandpa and his grandson, Jack, to plot a daring escape. Little do they know, the wicked matron is on to them…

The first ever stage adaptation of Grandpa’s Great Escape, the exhilarating number one bestselling children’s book by actor and comedian David Walliams, will tour UK arenas this Christmas – the perfect treat for all the family.

The wonderous stage design for this arena spectacular will see venues around the UK transformed into London and its landmarks, including Buckingham Palace and the River Thames, from thousands of feet in the sky, as Grandpa’s life size Spitfire soars through the air.

Grandpa’s Great Escape Live follows the acclaimed television film which aired on BBC One in December 2018, and will be directed by Tony® Award nominee Sean Foley (The Catherine Tate Show Live & The Painkiller). The set has been created by entertainment architects Stufish Productions (Beyoncé & Jay Z, Madonna, The Rolling Stones). The script adaptation of the book has been written by Kevin Cecil (Little Britain & Gangsta Granny television film).

Best available tickets for £25 (plus booking fees), valid for all performances at all venues, strictly subject availability.

For your chance to win 1 of 2 Family Tickets for Four to see Grandpa’s Great Escape; simply answer the following question:

The Prize is for a family of four best available tickets valid for all performances 23 December 2019 – 4 January 2020 (Birmingham 23, 24 & 26 December; London 27 & 28 December; Sheffield 29 December; Nottingham 30 December; Manchester 1 January; Newcastle 2 January; Glasgow 3 January and Liverpool 4 January), strictly subject to availability. Tickets are non-transferable. No cash alternative is available. Travel is not included. The winner is responsible for any extra charges incurred whilst redeeming the prize.

David Walliams
This competition is now closed. Winners will be announced shortly.