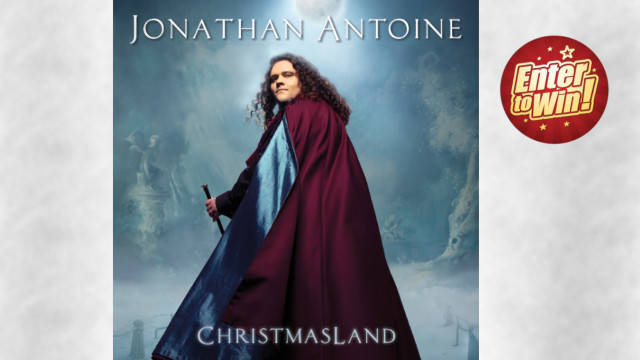 To celebrate the release of Jonathan Antoine’s first ever Christmas album, ChristmasLand, on 4th December, we are giving you the chance to win 1 of 6 copies.

The album comprises of traditional cherished carols, arranged to showcase the formidable voice for which Jonathan is renowned, including O Holy Night, O Come All Ye Faithful, Silent Night, and Hark! The Herald Angels Sing. It also features more contemporary classics including White Christmas, Have Yourself A Merry Little Christmas, and Winter Wonderland, highlighting the tenor’s versatile range and tone.

Additionally, Jonathan recorded his own rendition of These Are Special Times for ChristmasLand. Originally recorded by Celine Dion, the track was rewritten by legendary American songwriter Diane Warren for the album, including a remarkable new Italian lyric by Grammy Nominated multi-talent Marco Marinangeli.

Jonathan became a global sensation at the age of 17, following an astounding audition on Britain’s Got Talent, which went on to become the world’s most viewed television audition of any performer in history. He later released two best-selling albums with his singing partner, Charlotte Jaconelli, before going on to have further success as a solo artist and becoming the youngest tenor to achieve a #1 classical album.

ChristmasLand, the brand new album from Jonathan Antoine, is out on 4th December. Pre-order HERE.

For your chance to win 1 of 6 copies of ChristmasLand album; simply answer the question below:

No cash alternative. Competition open to UK residents only.

Jonathan AntoineChristmasland
Please log in or register to enter this competition.