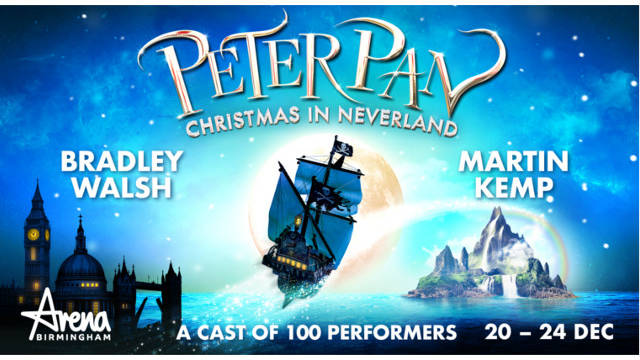 The World’s Biggest Pantomime presents Peter Pan, an epic arena size adventure that’s set to transport you to a world of spectacle and comedy headlined by two of the UK’s favourite stars, Bradley Walsh and Martin Kemp.

This perfect festive treat is brought to life by a cast of over 100 performers across three arena stages, including a thrilling team of flying trapeze and West End artists, BMX bike stuntmen and Matt Knight of BBC’s Let It Shine as Peter Pan.

Watch out for the terrifying twenty-five-foot animatronic crocodile on the movie style Neverland set, while a life-sized galleon sails around the Arena in front of a 10,000-gallon water wall. A giant 60 feet wide LED screen with both computer graphic imagery and live close-up TV relay of the action will also ensure you never miss a moment of this sensational family adventure!

For a chance to win 1 of 3 Family Ticket for Four to see the magical Peter Pan – Christmas in Neverland at Arena Birmingham on Saturday, 23 December at 7.00 pm, simply answer the question below:-

Family Tickets for Four are valid for Peter Pan – Christmas in Neverland at Arena Birmingham on Saturday, 23 December 2017 at 7:00 pm only. Prize is as stated and cannot be transferred or exchanged. No cash alternative will be offered. If the event is cancelled, The Promoter will use their reasonable endeavours to allocate alternative tickets but this will be subject to availability. These tickets are provided subject to the Promoter’s ticket terms and conditions.

Peter Pan – Christmas in Neverlandcompetitiontheatre
This competition is now closed. Winners will be announced shortly.