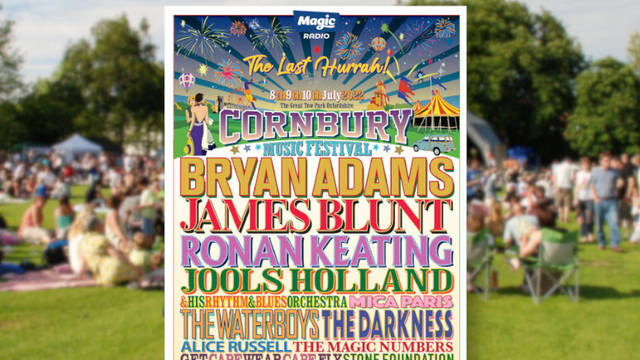 Festival season is just around the corner, and as always one making the headlines for all the right reasons is Cornbury!  With some of the biggest international names performing on the main stage including the perennial Canadian rocker Bryan Adams, witty crooner James Blunt, pop rockers The Darkness, epic British Band The Waterboys, purveyor of music Jools Holland and loveable Irish singer & presenter Ronan Keating. The Festival makes for a great weekend for all the family with celebrity chefs and fine dining, kids activities, posh loos, many more bands and something to enjoy for all ages.

We’ve got a pair of camping tickets (worth well £500) to give away! Cornbury Music Festival runs from 8 - 10 July 2022, it’s an established independent boutique festival in the stunning Oxfordshire countryside. Situated right opposite the Beckhams Country Pile and in an area heavily populated with glamorous celebrities, the festival has the atmosphere of a large village fete, that hosts some of the biggest stars in music from around the world on its stages. It’s well known for being one of the safest and friendliest festivals around, with great food and plenty of home comforts for the not so seasoned festival types!

For your chance to see these great headliners and so many more, simply answer this question below:

Prize not transferable and cannot be exchanged for financial value. Includes weekend camping pass and parking. Does not include camper-van tickets. Tents not provided, quiet camping available. Does not include travel to festival or on-site hospitality. Winners will be notified and sent tickets or ticket collection information prior to event. Usually tickets are sent out one week prior to event, or guests will be added to the guest-list for pass collection on arrival.

Win a pair of camping tickets to the last ever Cornbury Music Festival
This competition is now closed. Winners will be announced shortly.