Win a pair of tickets to see Billy Connolly: The Sex Life of Bandages in Cinema on 10 October and a copy of Billy Connolly Live: The Greatest Hits DVD 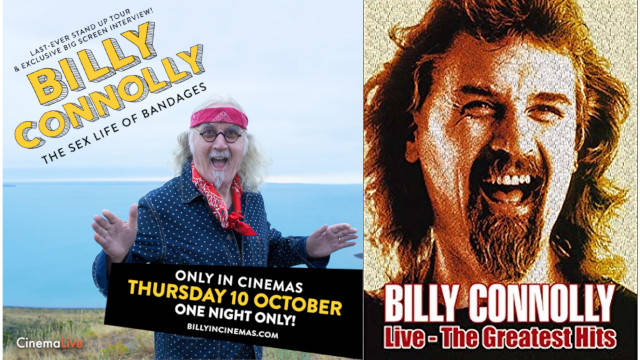 Enter below for a chance to catch Billy Connolly performing during his last ever stand up tour - from the comfort of your local cinema on 10 October 2019. And to warm you up, we’re adding a DVD of Billy Connolly Live: The Greatest Hits!

Hailed as the UK’s most influential comedian of all time, legendary Scot Billy Connolly is coming to cinemas with this brilliant show from his final stand-up tour. Recorded in 2015, during the Australian leg, this whip-smart routine is a riotous journey filled with outrageous tales and blistering observations of everyday absurdities. Screening as a special one-night-only event, Connolly will also muse upon his career, life and legacy in a deeply personal interview filmed exclusively for cinema audiences.

Prior to retiring in 2016 following his diagnosis with Parkinson's Disease, Connolly toured worldwide continuously for 50 years, performing to an audience of over 10 million. The Sex Life of Bandages is a big-screen tribute to an iconic funny-man whose sharp wit and anarchic storytelling is still as hilarious as ever.

For your chance to win 1 of 2 pairs of tickets to see Billy Connolly: The Sex Life of Bandages at your local cinema (10 October 2019) and a copy of the Billy Connolly Live: The Greatest Hits DVD, simply answer the question below:-

Tickets are valid for the Billy Connolly: The Sex Life of Bandages at your local cinema on 10 October 2019 only. Subject to availability. Prize is as stated and cannot be transferred or exchanged. No cash alternative will be offered.

Billy Connolly
This competition is now closed. Winners will be announced shortly.