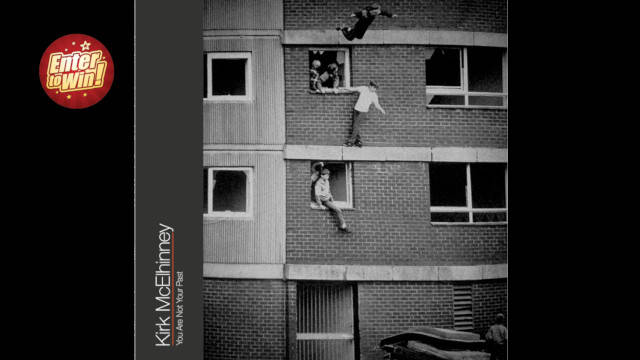 Rochdale born, now Manchester UK based, singer-songwriter Kirk McElhinney is renowned for his soulful voice, insightful lyrics and conveying inspiring messages of hope and positivity in both his recorded music and live performances. His music combines a rich and vibrant mosaic of acoustic guitar picking that is both unique and enticing. His concerts are unique: mostly down to his free-spirited jamming style and a visceral raw energy that captivates his audiences. His highly anticipated second album ‘You Are Not Your Past’ channels all his infectious live energy and, importantly, his rich and significant life experience to date. The album is released on 4th June 2021.

When Kirk turned thirteen, his uncle gifted him a basic 3 string guitar and his musical odyssey began in earnest. Early musical inspirations were the greats:  The Beatles, The Who, Led Zeppelin, The Doors, Hendrix, BB King, Frank Sinatra, Aretha Franklin, Queen, ACDC, Rolling Stones, Stevie Wonder, closely followed by more eclectic influences such as John Martyn, Nick Drake and flamenco jazz genius Paco Da Lucia. His switch to acoustic guitar came when he met, and was hugely inspired by, Scottish folk and guitar legend Bert Jansch. The die was well and truly cast! Since then, music has taken Kirk all over the world; to India, Australia and Europe and beyond; even supporting his hero Jansch on UK dates. Not only that, a collaboration with internationally renowned musician, producer and composer, Nitin Sawhney, led to Kirk forming The Safires, who released one album (‘Epic in the Ordinary’)

His 2014 debut solo album, ‘World Gone Blind’ unfortunately marked a bad time for Kirk. His poor health forced him to revise his lifestyle completely and become teetotal. His recovery from what was a difficult and challenging time was poured wholeheartedly into his new album ‘You Are Not Your Past’. But don’t be fooled into thinking the album is dark and negative - far from it: ‘You Are Not Your Past’ exudes positivity and encourages a metaphorical ‘uprising’ of sorts, with a message of hope and of ‘elevating’ our life’s mission. It shows us how we can ALL make our world better by joining in solidarity and common purpose and exchanging ideas openheartedly, free from judgement of one another. By discarding the negatives, we can create a fresh, bright future for humanity.

To win 1 of 6 copies of Kirk McElhinney’s New Album ‘You Are Not Your Past’; simply answer the question below:

Kirk McElhinney
Please log in or register to enter this competition.