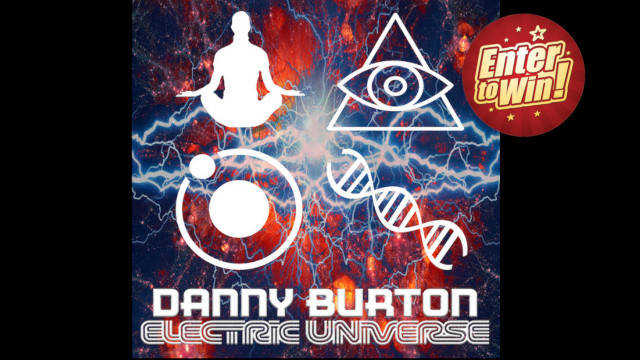 He’s the founding member of 90s indie band, The Face, alongside Zak Starkey & Gary Nuttall, as well as being Pete Townsend’s hand-picked choice for the leading role in Tommy the Musical.  But multi-musician/singer/songwriter, Danny Burton, fell victim to a near-fatal knife attack and life froze, leaving him in limbo.  Now the phoenix rises from his musical ashes to unveil his highly anticipated debut album, ‘Electric Universe’, which is set to be one of the most compelling rock albums of the year.  And you could win a limited edition promo signed copy ahead of release.

A rich tapestry of complex emotions and generation-spanning sounds and influences, ‘Electric Universe’ is the album that needed a life-time of ‘life’ before its birth. Honest, gritty and truly relatable, the album delivers a perfectly crafted collection of original pennings by Danny Burton.  The album harks back to those bygone eras of Brit Pop and classic rock – where the cool confidence of the mega bands created anthemic songs that instantly connect with people. All of those early influences are in there from Kravitz, Weller, ELO, The Beatles and Crosby Steels and Nash, right through to the hedonistic vibe of Oasis and Blur.  From the classic guitar based ‘Who You Gonna Love’ and ‘Magic Eyes’, the Bowie-esque ‘Dream Away’ and ‘Schitz’, the glam-rock vibe of ‘Time Alone’ right through to the Brit Pop sound of ‘Human Too’ and ‘Mundane Monday’ – this album provides a delicious serving of fresh, vibrant new songs that you ‘think’ you’ve heard before and you want to keep playing on repeat.  Traversing decades and generations of rock/pop, to create a collection of songs for ‘now’ – that’s the magic of ‘Electric Universe’.

The debut album from Danny Burton, ‘Electric Universe’, is released on Right Track/Universal on 1 November 2019

Danny BurtonElectric Universe
This competition is now closed. Winners will be announced shortly.