WIN THE 65TH ANNIVERSARY RESTORED THE LADYKILLERS ON DVD 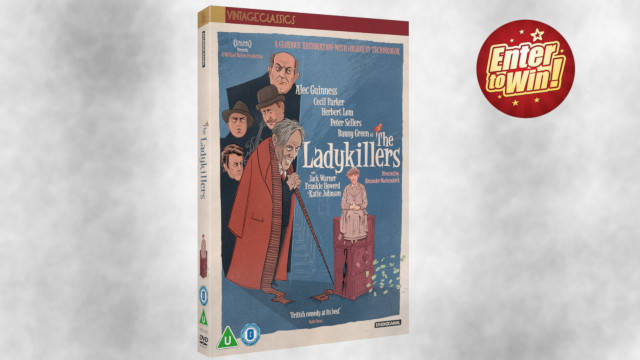 To celebrate the 65th anniversary of Ealing Studios’ flawless THE LADYKILLERS, STUDIOCANAL is releasing the first ever 4k restoration of the 1955 black comedy from the original 3-strip Technicolor negative, showcasing director Alexander Mackendrick’s vision in its full glory.

Featuring all-star line-up of the finest comedy actors of the era: Alec Guinness, Cecil Parker Peter Sellers, Herbert Lom, Danny Green, Frankie Howerd and Katie Johnson, THE LADYKILLERS follows the hilarious capers of a group of small-time crooks, taking on more they can handle in the form of their sweet, but slightly dotty, elderly landlady Mrs Wilberforce. The gang pull off a robbery but none of them could have predicted that their greatest obstacle to escaping with the loot would be their tiny hostess.

THE LADYKILLERS is released as a 4K UHD Blu-ray Collector’s Edition, Standard Blu-ray, DVD and Digital on 9th November, courtesy of Studiocanal’s Vintage Classics Collection and is available to buy HERE

To be in with a chance to win 1 of 5 copies of THRE LADYKILLERS DVD; simply answer the following question:

The Ladykillers
Please log in or register to enter this competition.