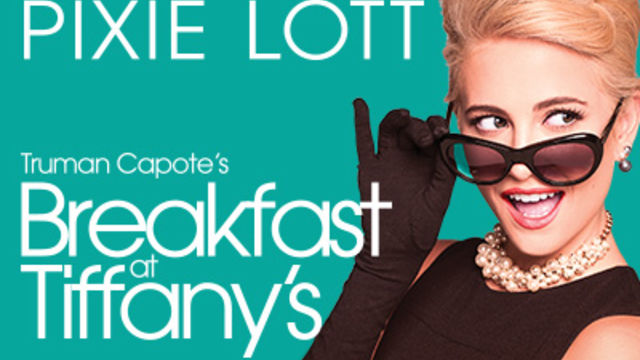 Breakfast at Tiffany’s, the classic tale of Holly Golightly written by Truman Capote and so memorably portrayed by Audrey Hepburn in the iconic 1961 film, is being given a new lease of life as a stage play with music in a sparkling, sophisticated production starring the multi award-winning Pixie Lott as Holly.

Adapted by Pulitzer Prize finalist and Tony and Olivier Award-winning playwright Richard Greenberg and directed by Nikolai Foster, this tale of vivacious, good-time girl Holly Golightly and her fantastical existence in 1940s New York City, is told through the eyes of a young writer named Fred, played by Matt Barber (Downton Abbey), who is completely fascinated by this exquisite extrovert who every woman wants to be, and every man wants to be with.

With memorable songs from the era, this stylish production is set to capture the hearts of audiences and sparkle like a diamond in a Tiffany's window.

Breakfast at Tiffany’s is touring the UK and Ireland, from the beginning of March followed by a 12 week run at the Theatre Royal Haymarket, 30 June - 17 September 2016.

To win 1 of 3 pairs of tickets to see BREAKFAST AT TIFFANY’S UK Tour; simply answer the following question:-

Winners will receive two best available tickets to a date of their choice of the Breakfast at Tiffany's UK tour (until 17 September 2016). For full tour date schedule see breakfastattiffanys.co.uk. Tickets are valid for Monday – Thursday performances and are subject to availability, non-transferable and dates outside of those listed above are not available as part of this offer. Tickets are non-transferable. No cash alternative is available. Winners will be contacted to choose their preferred date after the competition closing date. All winners are responsible for any extra charges incurred whilst redeeming the tickets and travel is not included. The producers of Breakfast at Tiffany's cannot guarantee the appearance of any particular artist, which is always subject to availability, illness and holidays.

Breakfast at Tiffany’stourtheatretickets
This competition is now closed. Congratulations to all our winners!