Win tickets to see Noises Off at the Garrick Theatre 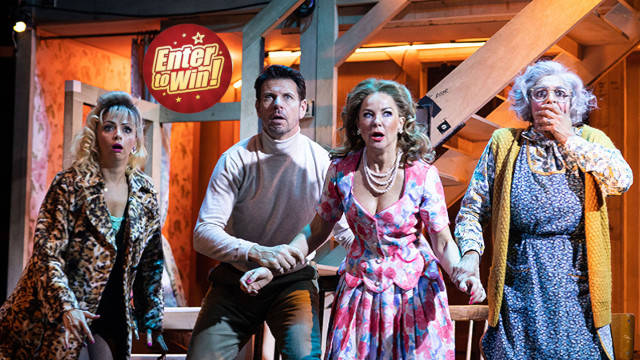 Michael Frayn’s iconic five star “masterpiece" (WhatsOnStage) comedy Noises Off starring Meera Syal (Goodness Gracious Me), Sarah Hadland (Miranda) and Lisa McGrillis (Mum) amidst a fantastic company is now playing in the West End, following a triumphant sell-out season at the Lyric Hammersmith Theatre.
Hailed as “The funniest play about putting on a play ever written” (Metro), Noises Off takes us behind the scenes with a company of actors in a hilarious and heartfelt tribute to the unpredictability of life in the theatre, with technical brilliance and split-second timing.
Originally premiering at the Lyric Hammersmith Theatre in 1982, Noises Off instantly became a timeless British comedy and went on to win the Olivier Award for Best New Comedy.
Now, in an exuberant new production by Jeremy Herrin (All My Sons, Wolf Hall, This House), the “funniest farce ever written” (Evening Standard) arrives at the Garrick Theatre for a strictly limited run, for fans to enjoy and new audiences to discover.
★★★★"These times call for laughter - and this delivers." (Sunday Times)
★★★★"There are few things funnier" (Time Out)
★★★★ "You will laugh out loud." (The Times)

Noises Off is playing at the Garrick Theatre for a strictly limited run until 4 January 2020.

For your chance to win 1 of 3 pairs of tickets to see Noise Off at the Garrick Theatre; simply answer the question below:-

Three readers will win a pair of Band A tickets to see Noises Off at the Garrick Theatre, valid for Tuesday to Thursday performances from 5 to 28 November 2019. Subject to availability. Prize is as stated and cannot be transferred or exchanged. No cash alternative. Travel and accommodation not included.

Noises OffGarrick Theatre
This competition is now closed. Winners will be announced shortly.