Your chance to have a copy of 1960s music film It’s All Happening on DVD starring Tommy Steele, courtesy of Network Distributing’s The British Film collection 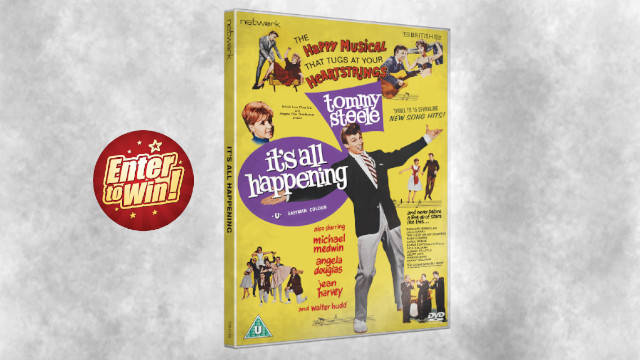 Billy Bowles (Steele) a talent-spotter at a recording company finds himself unlucky in both love and work. When he hears that the orphanage he visits and grew up in is in danger of being closed down it prompts a determination in him to organise a star-studded benefit concert filled to the brim with the most up-to-date singer and bands in order to raise funds – with unforeseen results!

From director Don Sharp who went on to work prolifically with Hammer Films and co-starring Michael Medwin (Scrooge, The Intruder), Angela Douglas (Carry On series) and Bernard Bresslaw (Krull, Carry On series) It’s All Happening is presented as a High Definition transfer from the original film elements in its original aspect ratio.
It’s All Happening will be available on DVD, Blu-ray and Digital from Monday 24th June.

It’s All Happening continues Network Distributing’s roll out of The British Film: Phase II label including more from Michael Medwin; The Teckman Mystery, Bang You’re Dead, Charley Moon and 24 Hours to Kill - To see a list of upcoming titles and those already available please visit - www.thebritishfilm.co.uk

For your chance to own 1 of 3 DVDs of It’s All Happening; simply answer the question below:-

It's All Happening
This competition is now closed. Winners will be announced shortly.