Your chance to have a pair of tickets to see Branagh Theatre Live: The Winter’s Tale in Cinema on 4 December 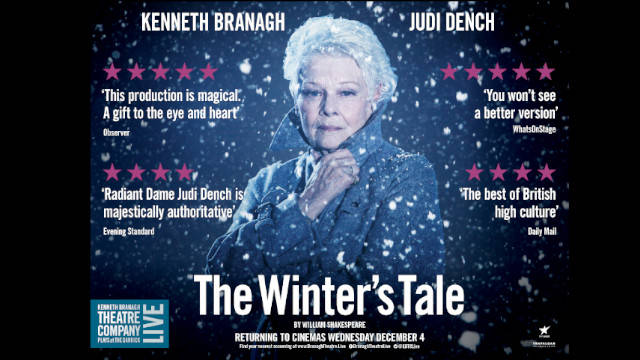 In collaboration with Trafalgar Releasing this festive season, 5 lucky readers will receive a pair of tickets each to see an encore performance of the spellbinding classic, Branagh Theatre Live: The Winter’s Tale starring Kenneth Branagh and Judi Dench in your local participating cinema on 4 December 2019.

King Leontes appears to have everything: power, wealth, a loving family and friends. But sexual jealousy sets in motion a chain of events with tragic consequences…

This critically acclaimed production was the first in the hugely successful Kenneth Branagh Theatre Company Live season that was broadcast to cinemas from London’s Garrick Theatre over the course of a year in 2015.

To find out more about the film and to book your tickets, click on here.

For your chance to have 1 of 5 pairs of tickets to see Branagh Theatre Live: The Winter’s Tale in a participating cinema on 4 December 2019; simply answer the question below:-

Tickets are valid for the Branagh Theatre Live: The Winter’s Tale in participating cinema on 4 December 2019 only. The Prize is subject to availability. The Promoter reserves the right to amend the specification of the Prize or offer an alternative Prize of equal or greater value. No cash alternative will be offered. The Prize is non-transferable. The Promoter may terminate, amend or withdraw this prize draw and/or these terms and conditions at any time. The contact details you provide to enter the prize draw will be used by the Promoter to contact entrants if necessary, and will not be shared with other companies unless you have opted to do so.

The Winter's TaleDame Judi Dench
This competition is now closed. Winners will be announced shortly.