Your chance to have a pair of tickets to see five-star show The Comedy About A Bank Robbery! 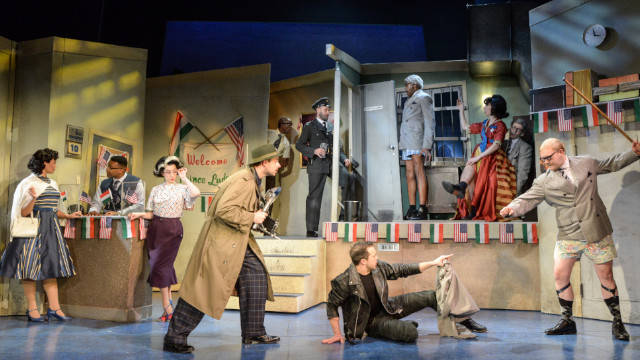 Breaking into its fourth year, Mischief Theatre’s smash-and-grab hit The Comedy About A Bank Robbery is a fast, fabulous comedy caper and the funniest show in the West End.

Summer 1958. Minneapolis City Bank has been entrusted with a priceless diamond. An escaped convict is dead set on pocketing the gem with the help of his screwball sidekick, trickster girlfriend… and the maintenance man. With mistaken identities, love triangles and hidden agendas, even the most reputable can’t be trusted. In a town where everyone’s a crook, who will end up bagging the jewel?

Book now for this dynamite comedy. It would be criminal to miss it!

★★★★★ ‘This is the funniest show in the West End’ The Telegraph

The Comedy About A Bank Robbery is playing at the Criterion Theatre until May 2020. For more information and to book tickets (from £10) call 03333 202 895 or visit bankrobberycomedy.com

To celebrate the show’s third birthday we’re giving you the chance to have 1 of 3 pairs of tickets to see The Comedy About A Bank Robbery at the Criterion Theatre; to enter simply answer the question below:-

Tickets are valid for Tuesday to Thursday performances until 18 July 2019. Subject to availability. No cash alternative. Travel and accommodation not included. Recommended for ages 11+

A Comedy about a Bank Robbery
This competition is now closed. Winners will be announced shortly.