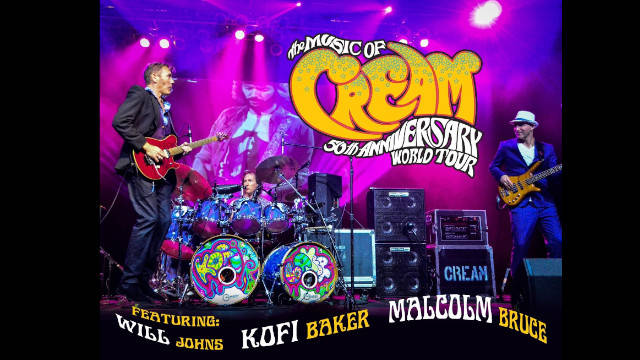 Re-live the magic of Cream! One of the greatest bands in the world, reinterpreted by the sons of Jack Bruce and Ginger Baker, with Eric Clapton’s nephew Will Johns! Here is your chance to have a pair of tickets to a show on The Music of Cream Tour of your choice.

Kofi Baker, Malcolm Bruce & Will Johns bring the legacy back to life, in an immersive multi-media experience show of electrifying live music, interplayed with archive footage of the original band, unseen interviews and personal anecdotes from the trio of growing up with the legends who were CREAM.

Ginger Baker. Jack Bruce. Eric Clapton. Cream was a chemical explosion like no other, the blueprint for every super group to follow and the heavy blues precursor to Hendrix, Zeppelin and so much more. Fifty years since their earth-shaking debut album, the bloodlines of that hallowed trilogy come together to pay tribute to Cream's legendary four-album reign over the psychedelic frontier of the late 1960s. Kofi Baker (son of Ginger) and Malcolm Bruce (son of Jack) unite with Will Johns (Eric's nephew by Marriage and son of Zeppelin/ Stones/ Hendrix engineer Andy) to unleash the sound that roused a generation. Feel the fire and the freedom of "Spoonful", "Strange Brew", "Sunshine of Your Love", "White Room", "Crossroads" and "Badge" —performed by the next generation of Cream, master musicians in their own right whose lives have been steeped in the Cream spirit and legacy.

Further information & tickets for The Music of Cream: https://www.musicofcream.com

For your chance to have 1 of 2 pairs of tickets to see The Music of Cream 50th Anniversary Tour 2019 of your choice; simply answer the following question:-

Tickets are valid for one of the The Music of Cream 50th Anniversary Tour 2019 show only. Subject to availability. Prize is as stated and cannot be transferred or exchanged. No cash alternative will be offered.

The Music of Cream
This competition is now closed. Winners will be announced shortly.