Your chance to win a Family Ticket for Four to Birmingham International Tattoo on Saturday 23 November at 6.00pm at Arena Birmingham 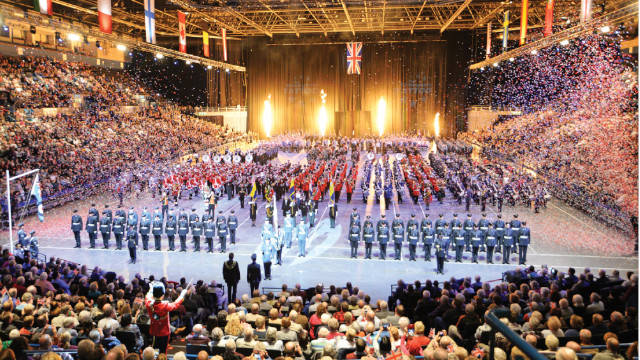 Britain’s biggest indoor international tattoo, with over 1,200 performers, is returning to Arena Birmingham bringing together marching bands, exciting displays and culminating in the spectacular Grand Finale featuring all the performers in a spectacle of pomp and pageantry.

Led by the world-famous Band of Her Majesty’s Royal Marines, international marching bands from France, Poland and the Netherlands will join our own British bands in a three-hour spectacle for all the family. Joining for the first time from the USA, will be the Kilgore College Rangerettes from Texas, who are the world's best-known collegiate drill team. Also sharing the arena with the musicians during the three-hour family event will be a range of spectacular displays including Royal Air Force Cosford Queen’s Colour, the RNRMC Field Gun Competition, the United Kingdom Disco Display Team, guest vocal soloists and the Parade of Massed Standards.

For your chance to win 1 of 3 Family Ticket for Four to Birmingham International Tattoo on Saturday, 23 November at 6.00pm at Arena Birmingham, simply answer the question below:-

Tickets are valid for the Birmingham International Tattoo at 6.00pm on Saturday 23 November 2019 at Arena Birmingham only. If the event is cancelled, the Promoter will use their reasonable endeavours to allocate you alternative tickets but this will be subject to availability. Prize is as stated and cannot be transferred or exchanged. No cash alternative will be offered. Additionally, these tickets are provided subject to the Promoter’s ticket terms and conditions.

Birmingham Tattoo
This competition is now closed. Winners will be announced shortly.