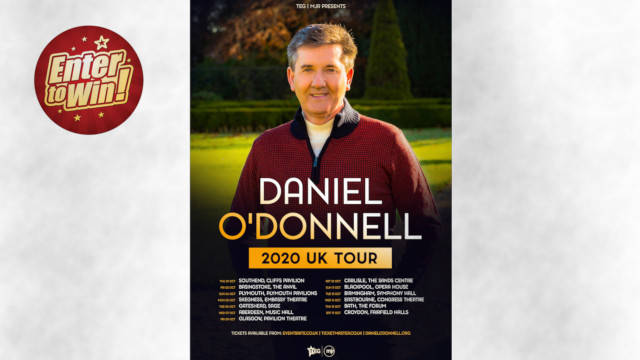 Loveable, Irish folk singer & TV personality with over 20 UK Top 40 albums and sales of 10 million records to date, hops over from Ireland this Autumn to delight fans with a UK Tour.

DANIEL O’DONNELL, MBE is an Irish singer, television presenter and philanthropist. After rising to public attention in 1983 he has since become a household name in Ireland and Britain; he has also had considerable success in the US and Australia. In 2012, he became the first artist to have a different album in the British charts every year for 25 consecutive years.

Known for his close relationship with his fanbase, and his charismatic and engaging stage presence, O'Donnell's music has been described as a mix of country and Irish Folk. He has sold over ten million records to date and is widely considered a “cultural icon” in Ireland. O'Donnell is a prominent ambassador for his home county of Donegal & competed on BBC’s Strictly Come Dancing in 2015.

For your chance to win 1 of 3 pairs of tickets to see the Daniel O’Donnell UK Tour October 2021; simply answer the following question:

Daniel O'Donnell
This competition is now closed. Winners will be announced shortly.